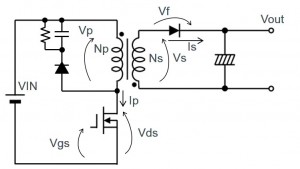 The figure below illustrates this operation and the voltage and current waveforms at major nodes: 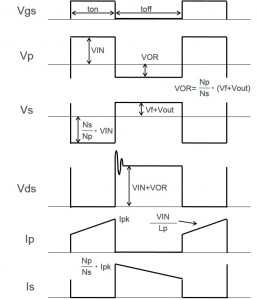 Because a gap is provided in the core of the transformer, the flyback method involves an increase in magnetic leakage flux, causing the generation of leakage inductance. Although a switching current also flows to the leakage inductance, resulting in a build-up of energy, because the transformer is not coupled to the other windings, there is no transfer of power. This generates a surge voltage to the drain of the MOSFET, as indicated by the Vds waveform shown above. A generated surge voltage exceeding the voltage tolerance of the MOSFET can lead to the destruction of the MOSFET. To prevent this possibility, a snubber circuit is provided that suppresses the surge voltage. In the above circuit diagram, the circuit composed of a resistor, a diode, and a capacitor provided on the primary side represent a snubber circuit. Keep in mind that snubber circuits are basically necessary in flyback converters.

・Strive to attain a solid understanding of basic operations, currents, and voltage.