Having finished the selection of MOSFET Q1 in the section [Selecting Critical Components – MOSFET related - 1], we now move on to the step of configuring a circuit around the MOSFET.

First, let us review the operation of the circuit. The signal from the OUT (PWM output) pin from the IC is adjusted in the D4, R5, and R6 to ensure that the MOSFET Q1 operates properly, and to drive the gate of the MOSFET. The MOSFET Q1 turns the rectified high voltage on and off that was input to the primary side of the transformer T1, and transmits the energy of the high voltage to the secondary side. When Q1 turns on, Ids flows. However, since the current cannot be allowed to flow indefinitely, the R8 is used to detect and limit the current. 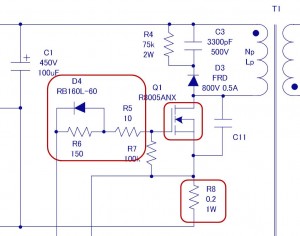 In order to drive the MOSFET, signal is output from the PWM output pin of the power supply IC. Since an optimal operation cannot be ensured by simply connecting the signal to the gate of the MOSFET, adjustments are needed to be consistent with the circuit and required properties. In concrete terms, the MOSFET’s switching loss and noise must be optimized.

It is difficult to calculate gate circuit constants based on fixed formulas. Therefore, beginning with the values that are shown in the circuit diagrams on the power supply IC datasheet, finally operate them on an actual device to determine whether the rise in MOSFET temperature is within the allowable range, that is, to evaluate the extent of switching loss. In addition, you need to measure the switching noise to see if it is in a proper range.

In the discontinuous mode for the current mode, which represents a selected operation, basically no switching loss occurs when the MOSFET is on, and the loss occurring during off-time becomes predominant. To reduce switching loss when the MOSFET is off, the speed must be increased by reducing the R5; this approach, however, causes sharp current changes, resulting in an increased switching noise. In the example circuit provided in this section, the following data emerge:

The diode D4 is used to rapidly discharge the gate charges when the MOSFET is off. A Schottky barrier diode is selected for this purpose by virtue of its low loss and high-speed operation.

As a precaution, since a pulse current flows into the R5, the pulse tolerance of the resistor to be used should be verified.

Because it performs multiple functions, the resistor may be subject to restrictions by the primary side inductance of the transformer and by the input voltage. For this reason, the resistor R8 is calculated according to the formula given below, where the values of Ippk and Duty are determined according to [Transformer Design (Calculating numerical values)]. Based on the CS pin voltage standard for BM1P061FJ, the value of Vcs turns out to be 0.4V.

The calculation yields an R8 value of 0.2Ω.

Also, the P_R8 value, which represents the loss due to the sense resistor R8, can be determined according to the following equations:

Thus, we have determined the values for the components around the MOSFET. Although the approach, requiring empirical evaluations and verifications by means of an actual device and involving more than formula calculations, may lack in clarity, remember that such is not uncommon in the power supply design process.

・The circuits for the control of switching transistors (MOSFET) operation are based on the specifications of the power supply IC.

・Power supply IC datasheets provide circuits and component values determination methods; such information should be consulted in designing a circuit.