In this section, the rectifying diode D6 and the output capacitors (Cout) C7 and C8, provided on the secondary side of the transformer T1 as the output, are explained. 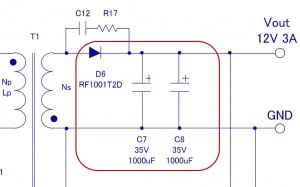 First, a simple explanation of the operation of this part of the circuit. On the secondary side of transformer T1, energy generated by switching (on/off) of a primary-side MOSFET is transmitted via an insulated barrier. This is an AC voltage that repeated switches on and off, and so in order to convert this into the required DC voltage, diode rectification is performed, here using a single diode D6, to obtain the DC voltage. There are ripples in the rectified voltage, and so the output capacitors C7 and C8 are used to smooth the ripples and output a DC voltage with only small ripples.

As the overall flow, as explained in the section [Isolated Flyback Converter Basics: Switching AC/DC Conversion] , the input voltage from the AC power supply is first rectified by a diode bridge and converted to a DC voltage. This DC voltage is cut (chopped) into the required power amounts through switching of a MOSFET controlled by a power supply IC to again be converted to AC, and a rectification and smoothing circuit in the output stage again converts this to the desired DC voltage, which in this design is 12 V DC. For an explanation of the entire circuit, please see the section [Designing Isolated Flyback Converter Circuits].

As stated above, D6 is used to rectify the AC voltage that appears on the secondary side of transformer T1, to obtain a DC output. As indicated in the circuit diagram, this is the same as a diode-rectifying (nonsynchronous) DC/DC converter. The difference is that the primary-side DC voltage is a high voltage of several hundred volts.

As the output rectifying diode, a fast diode (Schottky diode or fast-recovery diode) is used in order to reduce losses. If an ordinary diode were used, the desired power supply performance could not be obtained, and in a worst-case scenario, there would be concerns that heating might cause failure. The thinking here is the same as when selecting diodes for diode-rectifying DC/DC converters.

Finally, increases in temperature are checked with the diode incorporated into the circuit, and if necessary the component is reviewed, and the possibility of heat dissipation by a heat sink is studied. 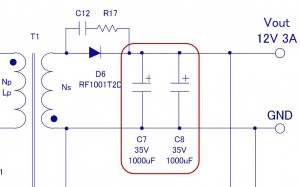 The output capacitors smooth ripples in the rectified voltage, and also serve to maintain stability during transient increases in the load current.

The output capacitor values are determined on the basis of the peak-to-peak ripple voltage (ΔVpp) that can be tolerated by the device to which the voltage is fed, and the ripple voltage (Is(rms)).

The impedance of electrolytic capacitors (low-impedance products) for general switching power supplies is stipulated to be 100 kHz, and so:

In other words, when a ripple voltage of 200 mVpp is taken to be the allowed value, a capacitor with an impedance of 0.01 Ω or lower must be selected.

The rated voltage is as a rule set to about twice the output voltage. It should be at least Vout×2＝12V×2＝24V ⇒ 25V

In the circuit shown, two low-impedance capacitors (35 V, 1000 µF) for a switching power supply are used in parallel.

The output ripple voltage and ripple current of an actual circuit should be checked.

・The basic circuit operation is the same for a diode-rectifying DC/DC converter.

・The output rectifying diode should be a Schottky diode or fast-recovery diode, for which losses are small.

・An electrolytic capacitor used as an output capacitor should be adequately examined with respect to the effect of ripple currents on service lifetime.