We begin a new chapter in the edition on AC/DC converter design, "Design Example of Isolated Quasi-Resonant Converters Using SiC MOSFET". In this chapter, in succession to the previously discussed flyback design and forward design, we shall describe in detail an isolated AC/DC converter design that uses a "quasi-resonant" type power supply IC.

Further, SiC (silicon carbide) MOSFETs are used as power switches. SiC is a next-generation semiconductor material with lower losses and superior operating characteristics at elevated temperatures compared with Si semiconductors. Upon hearing SiC semiconductors mentioned, the reader may assume some special applications that handle large amounts of power, but they can also contribute to energy efficiency and miniaturization in many ordinary applications as well. SiC semiconductors have already reached the stage of commercialization, and are even being adopted in automotive equipment, where strict demands are made regarding quality and reliability. Detailed information on SiC power devices is also provided on the Tech Web website for basic knowledge, and the reader is encouraged to read the relevant information on that site.

In this chapter, we plan to address the following issues.

Below is an AC/DC converter obtained from this design case study. It should be noted that the power supply IC is mounted at the position of the red circle on the rear surface, and the SiC MOSFET is mounted in the orange circle on the top surface. 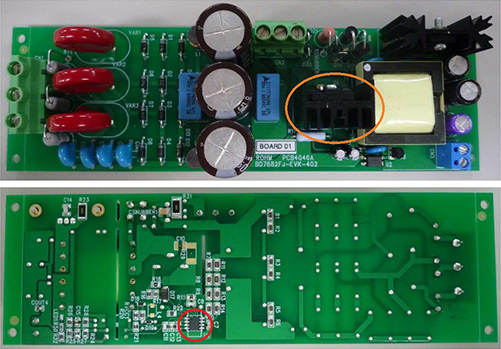 Example of an isolated quasi-resonant AC/DC converter using as a power supply IC the BD7682FJ,
and as a SiC MOSFET the SCT2H12NZ

Next time, we will be explaining the power IC used in the design and quasi-resonant devices.

・A SiC MOSFET is used as a power switch.