EMI countermeasures are extremely important in equipment design. Switching power supplies generate EMI given the nature of their operation by switching. There are the following three measures to address EMI.

1) Adding a filter to the input section
A common mode filter for power supplies, LC filter, or the like can be added.

2) Adding capacitors between the primary and secondary sides
These are known as Y capacitors. The primary-side GND and secondary-side GND are connected by a capacitor CY3 of 2200 pF. Moreover, CY1 and CY2, each 2200 pF, are inserted between the primary-side HV+ and the secondary-side GND. Such products may be used in applications where they are subjected to excessive conditions such as high voltages, and so capacitors that have been certified for all relevant standards are used. Here, we use 1 kV EA type (X1, Y1) capacitors. 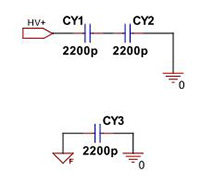 In any case, the influence of noise and the efficacy of the countermeasure(s) should be confirmed, and component values adjusted accordingly.

The voltage rectified by the output rectifying diode DN1 is smoothed by the capacitors Cout1 and Cout2, but for further smoothing and to filter switching noise, an LC filter may be added. In this example, the LC filter is constituted from L3, 2.2 μH, and Cout3, 220 μF. Here again, component values should be adjusted while checking the influence of noise and the effectiveness of the LC filter.

・EMI countermeasures include addition of an input filter, Y capacitors, and snubbers for output rectifying diodes.

・To deal with output noise, an LC filter can be added to the output.

・In all cases, component values must be adjusted while checking the influence of noise.