In the previous section, we explained “MOSFET VDS and IDS, and rated voltage of output rectifier diode” listed below, that should be verified apart from specifications, relating to “Critical checkpoint”. This time, we explain "Transformer saturation". 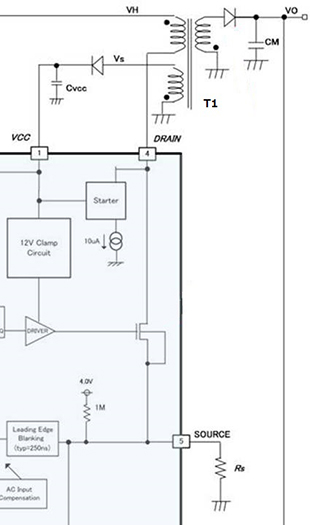 Transformer Saturation
The saturation of a transformer T1 explained here relates to the primary windings and secondary windings which govern flyback operation. Third windings (pins 4, 5) which generate a power supply VCC for the power supply IC are added to T1, and where the tertiary windings are concerned, VCC is checked separately to ensure that it is being generated according to design.

Exceeding this limit to enter the saturation magnetization state is called saturation of the transformer. This is the same as what happens in an inductor. Transformer saturation not only means the flux density cannot increase; it also has the unfortunate consequence of a sudden decrease in inductance. 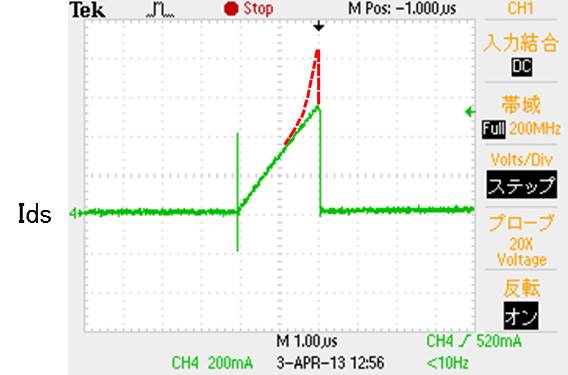 The waveform data on the right is the Ids of an internal MOSFET that switches the primary side of a transformer; the green line represents normal operation, that is, a state in which the transformer is not saturated. On the other hand, the dashed red line is a representative waveform in a case of transformer saturation.

As explained above, when a transformer reaches the saturated state, a high current flows, and so a sudden increase in current that could be characterized as a current spike appears in the Ids. If this current is excessive, destruction of the MOSFET could result.

Below, we summarize checkpoints and condition settings relating to transformer saturation.

・A transformer must not be allowed to reach saturation.

・Use an oscilloscope with current probe, etc. to observe the primary-side current waveform.

・If a transformer reaches saturation, an excessive current flows, possibly causing destruction of a MOSFET or other device.