What is Buck (step- down, non-isolated) system?

“Buck” means voltage step down. The buck converter is a step-down converter that performs rectifying by means of a diode; it is a representative system used in non-isolated step-down switching DC/DC converters. In the world of DC/DC converters, the buck converter is often referred to as a diode-rectifying or asynchronous converter. Compared with the forward system discussed previously, because no transformer is used in a buck converter, the primary and secondary sides are not isolated from each other. In applications where isolated is not needed, this system, which does not use a transformer, provides a simple solution. In the buck system, not requiring voltage regulation by a transformer, the output voltage is determined solely by controls performed by a MOSFET. For this reason, feedback from the output is always required (omitted in the figure). 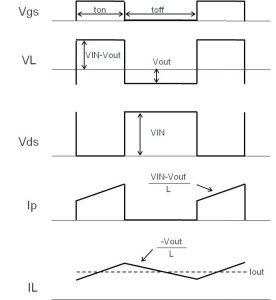 The buck system operates virtually in the same way as the forward system. The system features a circuit in which the transformer is removed from the forward system and the D1 is replaced by a MOSFET. When the MOSFET turns on, a current flows to the load through an inductor, and energy is accumulated in the inductor as well. During this operation, the diode remains off. When the MOSFET turns off, the energy stored in the inductor is supplied to the load through diode D2. The MOSFET turns on and off, as in the case of diode D1 in a forward converter. 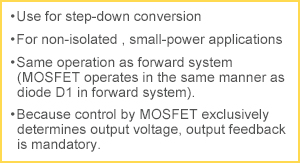 ・Except for the lack of a transformer, the buck system parallels the forward type and it represents the basic form of a non-isolated DC/DC converter.