We have explained that in addition to the specifications, the following "Critical checkpoints" should be examined when evaluating the performance of an isolated flyback converter. This time, we will consider the last of these checkpoints, "Electrolytic capacitors".

All components have a lifetime, but in the case of ICs and other semiconductor components, for example, excluding ramdom failures, their anticipated lifetimes are sufficiently long that they will outlast the useful life of the equipment without requiring any special consideration. However, in general aluminum electrolytic capacitors have relatively short lifetimes, and there is the possibility of performance degradation as a consequence of ageing in an operating power supply.

The lifetime of aluminum electrolytic capacitors is shortened considerably at higher temperatures. In general, they conform to the Arrhenius rule, also known as the "10-degree rule". That is, for every 10°C increase in temperature, the coefficient of ageing acceleration is doubled, which means the lifetime is halved. Of course this also means that, conversely, if the temperature can be lowered by 10°C, the lifetime is doubled (actual lifetime calculations for separate components should be performed according to equations or the like provided by the capacitor manufacturer).

When an Aluminum Electrolytic Capacitor Deteriorates 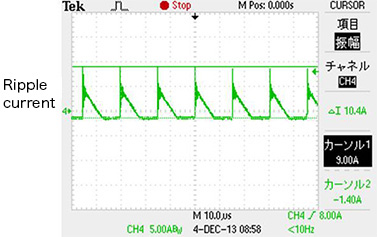 Points to be Noted

The essential point is to keep the capacitor temperature as low as possible. The following should be memorized as basic principles.

We have described various points to be noted pertaining to aluminum electrolytic capacitors. This information may already be well known to designers of power supplies, but one hears of cases in which these matters are taken into consideration when selecting components in the design stage, but upon mass production a changeover is made to a general-purpose aluminum electrolytic capacitor with the same capacitance value, so that problems arise in actual use. Even components one is familiar with often have aspects that demand attention, as we have seen in the above.

・Aluminum electrolytic capacitors should be selected with particular attention paid to the lifetime.

・The lifetime of an aluminum electrolytic capacitor is shortened dramatically at higher temperatures; in general, the "10-degree rule" for halving of the lifetime applies.

・Capacitance loss due to degradation is highly likely to cause malfunctions in circuit operation.