In succession to the discussion of SiC-SBDs which was concluded last time, we now begin an explanation of SiC-MOSFETs. The role of transistors in power conversion circuits is vital, and various efforts are being made to improve transistors in order to reduce losses and enable smaller application size. We have previously explained the advantages of SiC semiconductor power devices, and the benefits conferred by low losses, fast switching, high-temperature operation and the like should be immediately obvious. In this chapter, we would like to deepen the reader's understanding of SiC-MOSFETs through comparison with other power transistors.

At present, SiC-MOSFETs are regarded as useful from voltages of 600 V upward, and in particular 1 kV and higher. Where advantages are considered, we will compare these devices with Si-IGBTs, which are currently the mainstream for elements rated at 1 kV and higher. SiC-MOSFETs achieve reduced losses while switched off compared with IGBTs, and a smaller-size application can be expected through the realization of high-frequency operation. Compared with SJ-MOSFETs (super-junction MOSFETs) with comparable rated voltage, ON-resistance values are low, and so reduced chip areas and greatly reduced recovery losses are possible for the same ON-resistance. 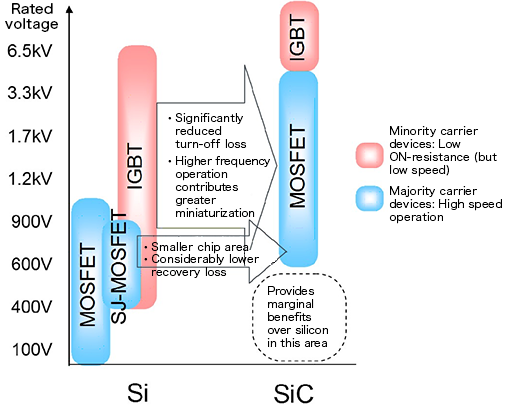 The following table summarizes the features of power devices with rated voltages ranging from 600 V to 2000 V. 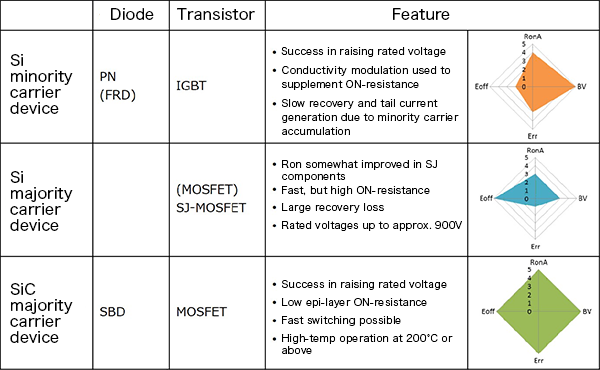 In the radar charts, RonA is the ON-resistance per unit area (a parameter representing losses during conduction), BV is the rated device voltage, Err is the recovery loss, and Eoff is the loss during switching off. SiC devices are pretty much perfect on all counts; and this comparison in no way overstates the performance of SiC devices.

From the next section, we will explain the features of SiC-MOSFETs in more detail, including comparisons with SJ-MOSFETs and IGBTs.

・SiC-MOSFETs can contribute to reduced losses and smaller application size relative to Si-MOSFETs and IGBTs.