What are SiC-MOSFETs? - Comparison of Power Transistor Structures and Features

In succession to the preceding section, we compare different power transistors. This time, we compare their structures and features. 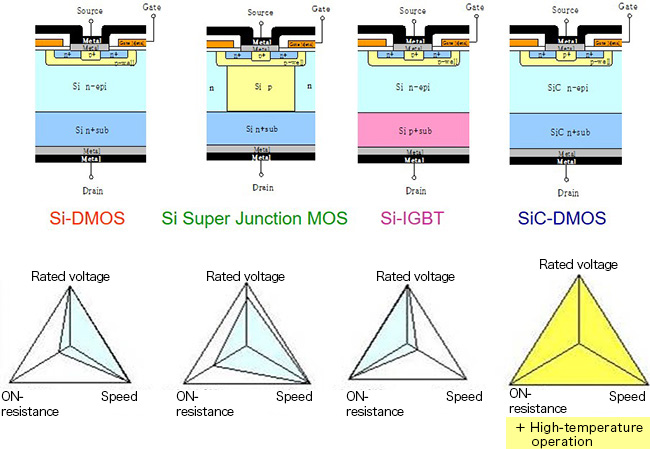 Structures differ depending on the process technology used, and the electrical characteristics are also different. Incidentally, DMOS is a general element structure that is a planar-type MOSFET. With Si power MOSFETs, both a high voltage and a reduced ON-resistance can be obtained, and in recent years super-junction structure MOSFETs (hereafter SJ-MOSFETs) have come into widespread use. We have presented a DMOS structure as an example of a SiC-MOSFET, but at present, ROHM is mass-producing trench-structure SiC-MOSFETs with further improved characteristics. We will be describing these devices in more detail in the future.

This graph plots the normalized ON-resistances and rated voltages of various transistors. As is clear from the graph, theoretically SiC-DMOS enables the fabrication of transistors with high voltages and low ON-resistances. Current SiC-DMOS elements have characteristics within the region of the ellipse; further developments are expected to result in improved performance. 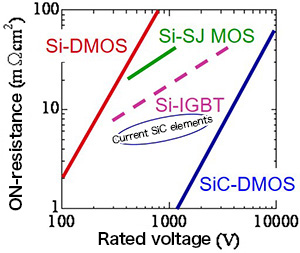 Next time, we will describe separate comparisons with SiC-MOSFET devices.

・The features of power transistors differ depending on the materials and structures.