From this point forward, we compare SiC-MOSFETs with other individual power transistors.

Compared with their Si counterparts, SiC-MOSFETs have a lower drift layer resistance but a higher channel resistance, and so the higher the gate-source voltage Vgs, which is the driving voltage, the lower is the on-resistance. The following graph indicates the relation between on-resistance and Vgs for SiC-MOSFETs. 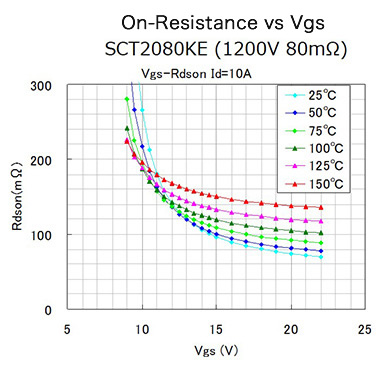 The on-resistance changes (declines) gradually from a Vgs of about 20 V, and approaches a minimum. The driving voltage Vgs for IGBTs and Si-MOSFETs in general is around 10 to 15 V, but in the case of SiC-MOSFETs, driving at Vgs = 18 V or so is recommended in order to obtain a fairly low on-resistance. In other words, one important difference with Si-MOSFETs is the need for a high driving voltage. When replacing a Si-MOSFET with a SiC-MOSFET, the gate driving circuit must also be studied. 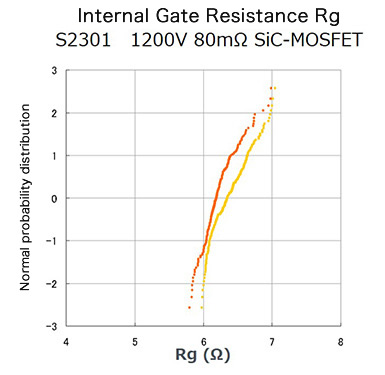 However, the external gate resistance also serves as protection from surge voltages that may be applied to the gate, and so the resistance should be chosen with due attention paid to surge protection.

・In order to obtain a low on-resistance for a SiC-MOSFET, the Vgs must be set higher than that for a Si-MOSFET, to around 18 V or so.

・The internal gate resistance of a SiC-MOSFET is higher than that of a Si-MOSFET, and so the external resistance Rg is set low; but surge protection should also be considered.