The IGBT low-Vd (or low-Id) region--in this example, the region up to a Vd of about 1 V--is a region in which we can overlook. In high-voltage, large-current applications, this poses no problems, but when the power required by a load for power supply ranges from low to high power levels, the efficiency in the low-power region suffers.

In contrast, SiC-MOSFETs maintain a low on-resistance over a broad range.

It was previously explained on a few occasions that SiC power devices have excellent switching characteristics and are capable of high-speed switching while handling high power levels. Here, we explain in some detail the difference with the switching loss characteristics of IGBTs.

It is well known, as a basic property of IGBTs, that when an IGBT is switched off, a tail current flows due to the device structure, and therefore the switching loss is increased. 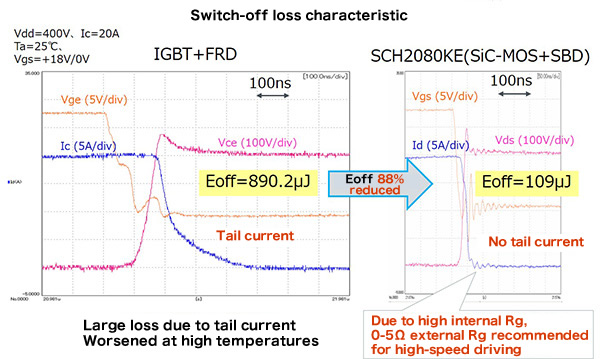 Upon comparison of waveforms during switch-off, in the case of an SiC-MOSFET there is in principle no tail current, and so without this contribution, clearly the switching loss is extremely smaller. In this example, the combination of a SiC- MOSFET and a SBD (Schottky barrier diode) reduces the switching-off loss Eoff by about 88% in comparison with the combination of an IGBT and a FRD (fast recovery diode).

Another important point is that the tail current of an IGBT increases with temperature. It should also be noted that for high-speed driving of a SiC-MOSFET, the external gate resistor Rg must be adjusted appropriately. This was explained the previous time as a difference with Si-MOSFETs.

Next, we consider the loss at switch-on. 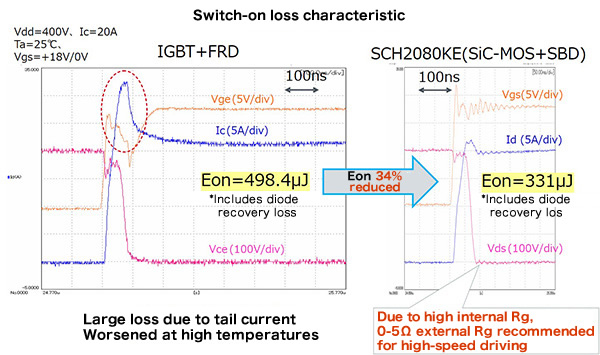 When an IGBT is switched on, the part of the Ic current (blue curve) encircled by the red dashed line flows. This is due largely to the diode recovery current, and represents a large loss upon switch-on. When the SiC-MOSFET is used in parallel with a SiC-SBD, in conjunction with the fast recovery characteristic, the loss during MOSFET switch-on is reduced. It should be remembered that, like the tail current of an IGBT, the switch-on loss when paired with a FRD increases with temperature.

In any case, we see that with respect to switching loss characteristics, SiC-MOSFETs are superior to IGBTs.

The data presented here are results from ROHM's testing environment. Depending on the driver circuit or various other conditions, results may be different.

・Switching losses of SiC-MOSFETs can be greatly reduced compared with IGBTs.