・SiC has been developed as one solution to energy-related problems.

・In addition to reducing losses, SiC offers the major advantage of miniaturization.

The last time, the physical properties of SiC and the features of SiC power devices were explained. SiC power devices are capable of high voltages, low on resistances and fast operation exceeding Si power devices, and can operate at higher temperatures as well. This time, we will talk about the background to development of SiC devices and their specific advantages.

Previously we explained that by using SiC in power devices, power conversion can be performed with lower losses than is possible using conventional Si power devices. The reader will already understand that this has been a major reason for the commercialization of power devices using SiC. It should also be easy to imagine that the background to this development was the worldwide goal of promoting energy efficiency.

Taking as examples low-power DC-DC converters, the spread of mobile devices has resulted in conversion efficiencies that exceed 90% as a matter of course. However, it is thought that there is still room for improvement of the efficiency of high-voltage and large-current AC-DC converters. It is well known that directives for energy conservation, centered on the EU, have resulted in urgent demands for energy efficiency including reduced standby power consumption of electric and electronic equipment.

Given such circumstances, reducing energy losses that occur during power conversion is an urgent order of business, and to this end, naturally a material that transcends the limits of Si must be utilized in power devices.

By using SiC power devices, switching losses can be cut by 85% compared for example with IGBTs. As indicated in this example, there can be no doubt that SiC power devices are one solution to energy problems. 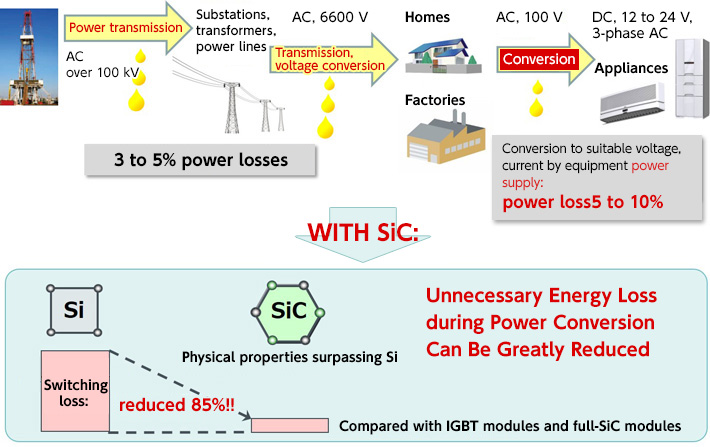 As already stated, by using SiC, large reductions in energy losses become possible. Of course, this is a major advantage, but let’s consider such other advantages as low resistance, fast, operation, and high-temperature operation, which are also features of SiC.

We proceed with a comparison with Si. “Low resistance” leads directly to low losses, but for the same resistance value, the area of an element (chip) can be made smaller. When handling large amounts of power, sometimes power modules are used, in which multiple transistors and diodes are incorporated into a module. As an example, a SiC power module can be designed to be about 1/10 the size of an Si module.

Where “fast operation” is concerned, by raising the switching frequency, smaller peripheral components such as transformers, coils and capacitors can be used. There are examples in which sizes could actually be shrunk to 1/10 or so.

“High-temperature operation” means that operation at higher temperatures is allowed, and so heat sinks and other cooling mechanisms can be simplified.

Thus there is of course an approach in which SiC is used to improve efficiency and to enable handling of larger currents, but for power levels currently used, adopting SiC has the further major advantage of enabling dramatic miniaturization. As opposed to direct energy conservation, indirectly reducing energy consumption as a result of installation locations, transportation and the like is another major goal. 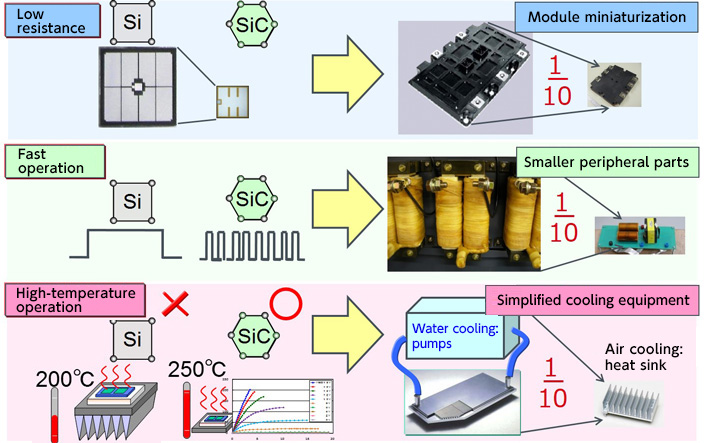 ROHM’s seminar materials provided at the seminar venue. Basic properties of silicon carbide(SiC) which has the potential for minimizing the size of power products, reducing power consumption, and enhancing efficiency, how to use SiC diodes and SiC MOSFETs, and application examples utilizing the merits are described.

ROHM’s seminar materials provided at the seminar venue. Basic properties of silicon carbide(SiC) which has the potential for minimizing the size of power products, reducing power consumption, and enhancing efficiency, how to use SiC diodes and SiC MOSFETs, and application examples utilizing the merits are described.