Currents and Voltages Occurring Due to Switching in Bridge Circuits

In the previous article, the turn-on and turn-off operation of the gate driving circuit in a SiC MOSFET bridge configuration was explained. In this article, we explain the currents and voltages that occur due to changes in the MOSFET VDS and ID during this series of switching operations.

The circuit diagram below is an example of a synchronous boost circuit with a bridge configuration, when the LS switch is turned on. In the circuit diagram, the parasitic capacitances, inductances, and resistances of the SiC MOSFETs are also represented, and the gate currents (green lines) that flow in places due to changes in the VDS and ID of the HS and LS SiC MOSFETs are also shown. 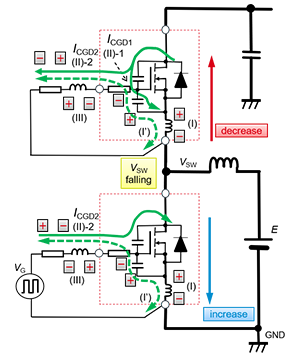 Voltages Occurring Due to dID/dt, Rate of Change of ID

Because of the change in ID, the voltages indicated in equation (1) below occur.

These voltages occur because the current ID flows in the parasitic inductances that are present at the sources of the SiC MOSFETs; they occur at the sections labeled (I) in the circuit diagram. Because of these voltages, currents (I') flow.

Currents Occurring Due to dVDS/dt, the Rate of Change of VDS

From the equation, it is seen that when CGD is large or when CGD/CGS is small, ICGD1 becomes large.

Because dVDS/dt and dID/dt take on both positive and negative values, the polarities of the currents and voltages that occur as a result are different during turn-on and during turn-off. This will be discussed in detail in the next article.

・Due to changes in the VDS and ID of MOSFETs in switching operation in gate driving circuits, parasitic capacitances and inductances cause currents and voltages to appear in the circuits.

・Because dVDS/dt and dID/dt assume both positive and negative values, the polarities of the resulting currents and voltages are different during turn-on and turn-off.