What are SiC Schottky barrier diodes? - Reverse Recovery Characteristics of SiC-SBDs and Si-PNDs

First, the reader should already know that reverse recovery refers to a phenomenon in which, when a diode has entered a reverse-biased state, it does not immediately turn off completely, and a reverse current flows for a time, and that trr is this time in which the reverse current is flowing. We have already discussed how the trr of SiC SBDs is faster than that of Si PNDs, including Si FRDs; this time, we will explain the reason for this, and confirm actual characteristics.

The waveform diagram on the right shows the relation between current and time during reverse recovery of an SiC SBD, and an Si FRD, which is a fast PND. We see that the red curve indicates that the reverse current of the SiC SBD has a shorter trr. It should also be noted that this characteristic is studied because reverse currents cause losses. 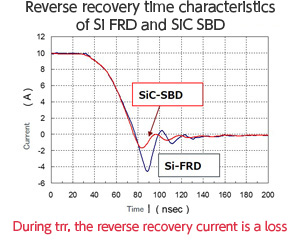 From here, our explanation uses cross-sectional diagrams of diodes. The following diagram shows the movement of electrons and holes when the bias of a Si PND changes from a forward bias to a reverse bias

During a forward bias, carriers are injected and current flows through the recombination of holes and electrons. When a reverse bias occurs, holes (the minority carrier) in the n layer return to the p layer, but this takes some time, and a current flows until the holes finally return (some are annihilated due to the finite lifetime). This is the reverse recovery current. 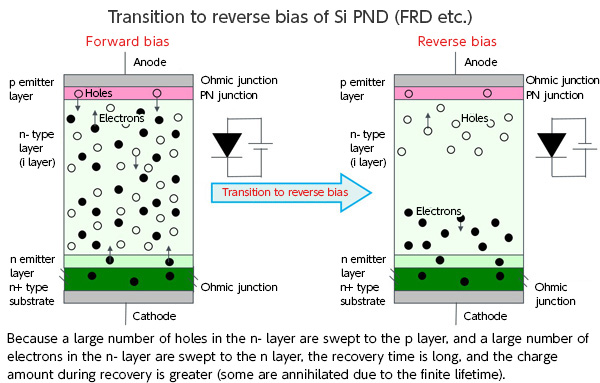 The second diagram shows transition to reverse bias of an SiC SBD. Because of the Schottky barrier structure, there is no PN junction, and so there are no minority carriers, and during reverse bias there is only the return of electrons, which are the majority carrier in the n layer. Hence only a very short reverse recovery time is necessary, and compared with a PND, the device is turned off for a much shorter time.

These differences in reverse recovery times are all due to the diode structures. Hence reverse recovery is also rapid for a Si SBD. However, the withstand voltage of Si SBDs is about 200 V, and the devices cannot be used at higher voltages. In contrast, by using SiC, SBDs having high withstand voltages of over 600 V can be manufactured. This is a major advantage of SiC SBDs.

Next, we present data relating to the temperature dependence and the current dependence of the reverse recovery characteristic.

The upper waveform diagrams and the graph indicate the differences in the reverse recovery characteristic with temperature. For a Si FRD, as the temperature rises the carrier concentration increases, and more time is accordingly required for reverse recovery; the reverse current and trr are both larger relative to the values at room temperature. However, because SiC itself has almost no temperature dependence, and so a SiC SBD exhibits almost no change in reverse current characteristic. The upper-right graph plots the differences in trr; on comparison with two types of Si FRD, we see that the trr of the SiC SBD has essentially no temperature dependence.

The lower waveform diagrams show the relation to the forward current IF during forward biasing. Here too, we see that the SiC SBD is almost completely unaffected.

Finally, we have up till now said that almost no reverse current flows in an SiC SBD, but in the waveform diagram, it is clear that the current is much smaller than in an Si FRD, but is not zero. This is because a parasitic junction capacitance and the like always exist in a diode, and this causes current to flow. Hence the reverse current of an SiC SBD should be understood as far smaller than that of a Si PND, but greater than zero.

・An SiC SBD has a faster trr and much smaller reverse recovery current compared with a Si PND (FRD), and so losses are small.