This time, we will present several examples of SiC-MOSFET application. This will include some older information and prototype-level information, but it should be of use for illustrating the advantages of using SiC-MOSFETs and presenting new possibilities. In addition to SiC-MOSFETs, examples of the use of SiC-SBDs and full SiC modules can be viewed here.

The demonstration unit shown below was fabricated jointly with Power Assist Technology, Ltd.

Three types of transistors--Si IGBTs, second-generation SiC-MOSFETs, and the third-generation trench-structure SiC-MOSFETs described the last time--were used in the full-bridge inverter sections to construct three types of phase-shift DC/DC converters of the same size as demo units. The figures below show the comparison of efficiencies.

When using SiC-MOSFETs, superior switching performance is exhibited, achieving high-frequency operation at 100 kHz and enhanced power performance that would be difficult to achieve using Si IGBTs. When using second-generation (2G) SiC-MOSFETs, a single switch is configured by connecting two transistors in parallel, but when using third-generation (3G) SiC-MOSFETs, by reducing the ON-resistance, the number of transistors can be decreased from eight to four. The best results for efficiency are obtained using the third-generation (3G) SiC MOSFETs, but both the SiC-MOSFET types achieve higher performance than is possible using the Si IGBTs.

Pulse power is a system which supplies power instantaneously for short periods of time; application examples include gas lasers, accelerators, X-ray sources, plasma power supplies, and the like. Existing solutions include vacuum tubes (e.g. thyratrons) and Si switches, but there have been demands for higher rated voltages and faster switching. In response to the demands, SiC MOSFETs have achieved ultra-high voltage high-speed switching by combining high rated voltages and fast operation. This is something that could not easily be achieved using Si IGBTs from the standpoint of operation speed. The following example was submitted to CEATEC 2014 and Techno-Frontier 2015 with the cooperation of Fukushima SiC Applied Engineering, Kyoto Neutronics, and Japan Science and Technology Agency. 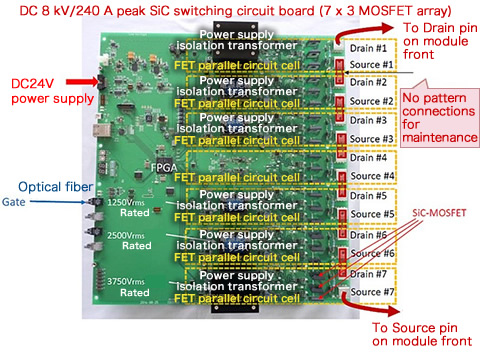 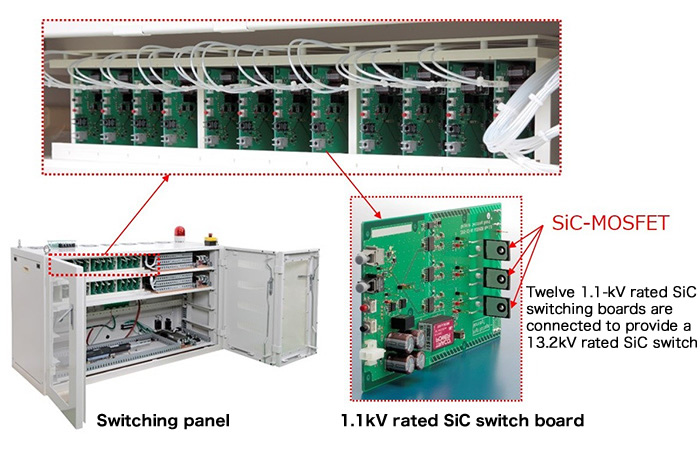 ・The effectiveness of SiC-MOSFETs should be considered carefully, taking hints from case studies that utilize SiC-MOSFETs.