Tips for Practical Use: Snubber Capacitors

What is a Snubber Capacitor?

A snubber capacitor is a capacitor that is connected to a large-current switching node for the purpose of reducing the parasitic inductance of electric wiring. Parasitic inductance causes large surges at switch-off (when the current is blocked), and should such surges exceed component ratings, there are concerns of consequent failure in the worst case.

In order to effectively reduce wiring inductance, capacitors must be connected near the lines indicated by the red ovals in the circuit diagram.

A snubber capacitor must have electrical ratings to cope with the conditions of the connection location, and moreover must be evaluated before use, including differences in characteristics arising from the capacitor structure and materials. As examples, the following capacitors were evaluated.

In these examples, small-value capacitors are installed close to SiC MOSFET terminals, adhering to the basic principle of placing large capacitances between lines. 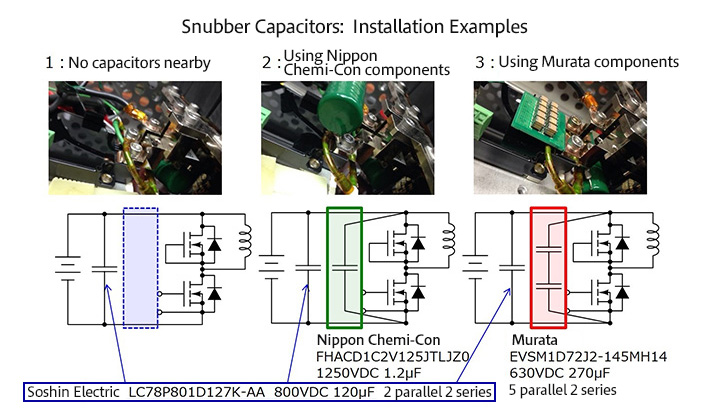 The surge waveforms occurring between drain and source when the SiC MOSFET is turned off and current is cut off are shown for the above three conditions. When a capacitor is added near the terminals of the SiC MOSFET, there is a surge suppression effect, and the effect differs depending on the type of capacitor.

Next, suppression effect waveforms are compared for the example of a ceramic capacitor (in red above), with the conditions changed. 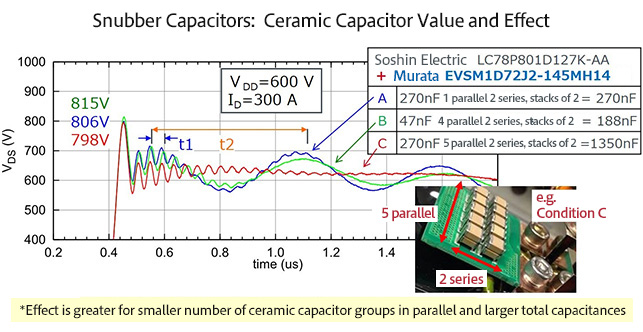 When the capacitance of a ceramic capacitor is small, ringing t2 at a frequency of about 2 MHz occurs (green B, blue A). This is attributed to charge that has accumulated in pathways of large loops, with large inductance.

As a result, in the case of ceramic capacitors, we can say that the surge suppression effect is greater for a smaller number of parallel groups and for larger total capacitance.

Finally, the effect of large-value capacitors is checked. Below, surges are compared when large-capacitance capacitors are and are not present, in a state in which five groups of two series-connected ceramic capacitors are connected in parallel. 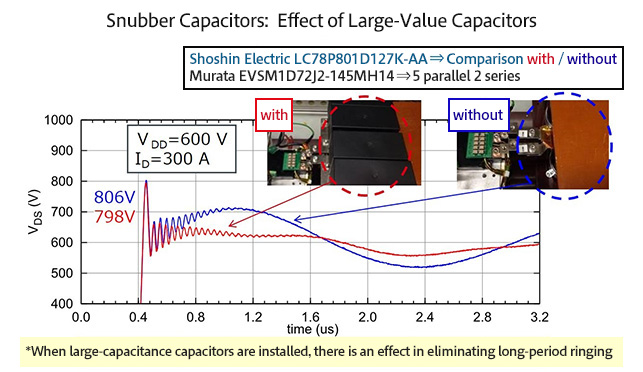 As indicated by the red waveform for the case in which a large-capacitance capacitor is present, we see that a large-value capacitor is effective in suppressing long-period ringing.

In these examples, by connecting a large-value capacitor and ceramic capacitors close to the terminals of the SiC MOSFET as snubbers, a considerable suppression effect is obtained. However, the position of capacitor installation, the combination of parallel and series connections of capacitors, and slight differences affect the surge waveform, and so it is necessary to verify the suppression effect in actual equipment.

・In order to exploit high-speed switching performance, parasitic inductances in electric wiring must be suppressed insofar as possible.

・Capacitors are connected near power terminals to reduce wiring inductance.