In the previous article we presented an example of efficiency improvement and noise reduction in an LED illumination circuit. In this article, we describe an example of an air conditioner. In recent years, the APF (Annual Performance Factor), which indicates annual energy efficiency, has been emphasized, and so this is one important issue relating to efficiency improvements in household appliances such as air conditioners.

This circuit is an example of a continuous current mode (CCM) PFC circuit for an air conditioner. Results are presented comparing the efficiency when, in this circuit, the FRD (fast recovery diode) used in the original design is changed to an SCS112AM, which is a SiC SBD (Schottky barrier diode), and a separate RFUS20TF6S FRD, or when the switching transistor is changed from the original IGBT to a R6035GN Hybrid MOS, or when both the transistor and the diode are changed. 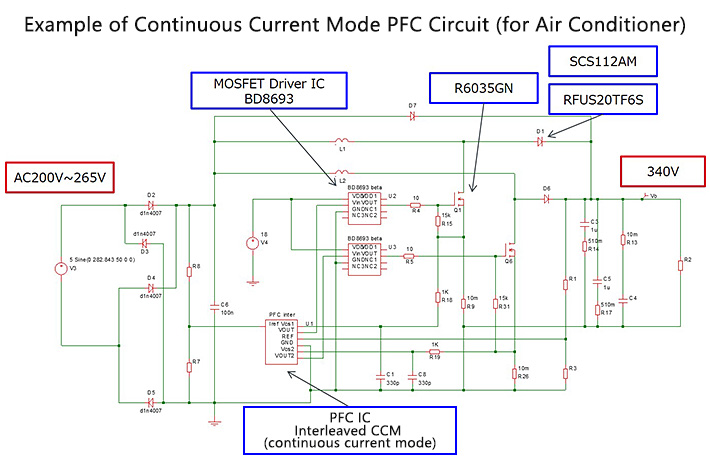 Changing the FRD of the Original Design to a SiC SBD

Data is presented comparing efficiency and losses when the FRD used in the original circuit is replaced with a SiC SBD. 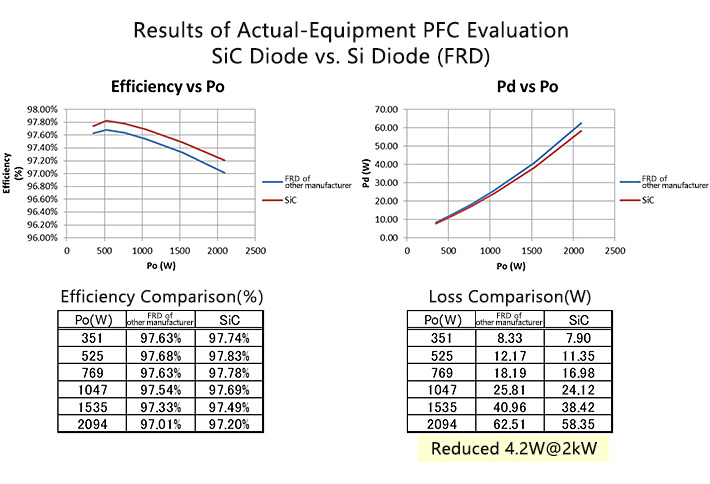 The above figures are all measured data. Efficiency improvements of about 0.1 to 0.2% were observed, but in terms of losses, for a Po of 2094 W, the difference was about 4.2 W.

The main reason for this difference is the fact that, compared with the original FRD, the trr (reverse recovery time) is shorter for the SiC SBD that was used to replace it. In continuous current mode PFC, the efficiency is better when the diode trr (reverse recovery time) characteristic is faster, as explained in “Continuous Current Mode PFC: Examples of Efficiency Improvement Using Diodes”. Moreover, differences in reverse recovery characteristics of SiC SBDs and FRDs are explained in detail in ”What are SiC Schottky Barrier Diodes? - Reverse Recovery Characteristics of SiC-SBDs and Si-PNDs”, which should be referenced as necessary.

Next, we present data that compares losses for different switching transistors. The diode used in these cases is a SiC SBD.

By changing the switching transistor from an IGBT to the R6035GN Hybrid MOS transistor, a loss reduction of 4 W when operating at an output power of 1000 W could be confirmed.

There are two reasons for this. One is the fact that the Hybrid MOS device is capable of faster switching, so switching losses are reduced. The other is that the on-resistance is lower, so that conduction losses are also reduced. 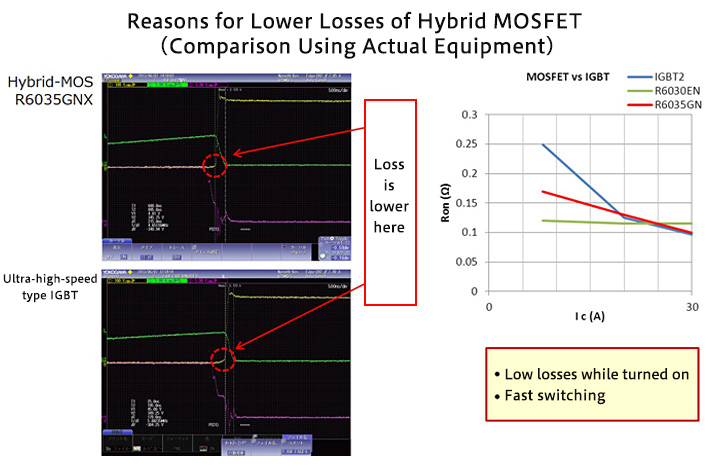 This waveform data reveals that the rising transition of the Hybrid MOSFET is fast, so that losses are lower than for the IGBT in the circled areas. It should also be noted that although the IGBT used is an ultra-high-speed device, it is still slower than the Hybrid MOSFET.

The R6035GN, represented by the green line, is a standard super-junction MOSFET (SJ MOSFET); it has an on-resistance that is low for low currents, but is somewhat higher than for IGBTs at high currents. This is a characteristic of standard SJ MOSFETs. Due to this difference in characteristics, IGBTs are selected for use with large currents, but there is the problem that in low-current regions the IGBTs result in larger losses and poor efficiency.

Efficiency Improved by Changing to a Hybrid MOSFET + SiC SBD

Finally, we present efficiency data for combinations of diodes and switching transistors.

The graph plots the data in the table. As a result, we see that the best efficiency is obtained for the Hybrid MOSFET + SiC SBD combination.

Where PFC is concerned, the approaches to loss reduction are somewhat different for continuous current mode (CCM) and for boundary current mode (BCM). This should be considered when endeavoring to improve efficiency.

・In continuous current mode PFC, by replacing an IGBT + FRD with a Hybrid MOSFET + SiC SBD, efficiency can be improved.

・In the example given, efficiency is improved due to the fast trr characteristic of the SiC SBD and the low on-resistance and fast switching of the Hybrid MOSFET.