In this 17th column, I would like to explain the most basic calculation method and simulation for electromagnetic compatibility (EMC), which is the trial calculation of conducted emission (CE). This is the “1 Ω/150 Ω method” in the IEC 61967-4 standard relating to electromagnetic compatibility (EMC) characteristics for a semiconductor integrated circuit (LSI).

In this method, a spectrum is measured with the equivalent of 1 Ω connected to the ground pin of the semiconductor integrated circuit (LSI) and a network that is the equivalent of 150 Ω connected to the power supply pin, signal pins and the like. Note, however, that this method is not suitable for semiconductor integrated circuits (LSIs) with large power supply currents, where the voltages generated at both ends of 1Ω at the ground pin becomes so large that it interferes with basic operation. There are limiting values stipulated for electromagnetic interference (emissions), and if actual figures are not within these limits, a product cannot be said to conform to the relevant standard. Originally, IEC standards and other standards specify the measurement method, and the limit values are provided as reference examples. However, in general use, the limiting values are regarded as the standard values.

Well then, let’s move on to the EMC calculation method and EMC simulations. As explained previously, the IEC 61967-4 standard is a simple method to measure the supply current and signal currents of semiconductor integrated circuits (LSI) in terms of electromagnetic compatibility (EMC). The calculation procedure is as follows.

I think that this much calculation could be automated by writing a script or macros that could be used within a circuit analysis tool. When performing measurements, a spectrum analyzer is connected, and so when calculations are to be performed, the input impedance of 50 Ω must be further connected (here mistakes are easily made, so be careful!).

Upon confirming that there is conformance to a standard, you may pat yourself on the back; but if conformance is not achieved, countermeasures must be taken. These may include improvements to ① above, that is, selecting the operation mode and redesigning the silicon chip, or, in ②, modifying the type and value of the product-dependent decoupling capacitor (CD), or the like.

The calculation method explained here can be tried using a circuit analysis tool, does not require measured values, can be automated using simple macros or scripts, conforms to the IEC 62433 standard, does not use data assimilation, and does not use noise elimination. Below are shown diagrams to serve as references for measurements and calculations. 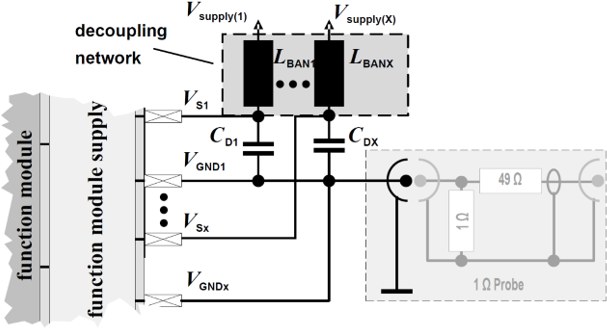 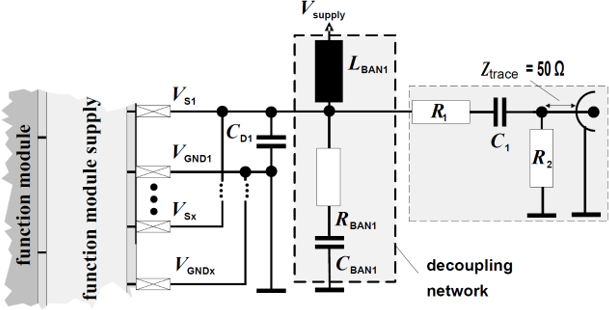 Thank you for your kind attention.