Good day. My name is Shiraishi, and I’m with ROHM. In Part 2, I would like to introduce a newly developed series of -40 V/-60 V P-channel power MOSFETs that use ROHM’s fifth-generation fine process technology, selected from among the new low-voltage MOSFET products for which I have responsibility.

Due to such advantages, P-channel MOSFETs are widely used in machine tools, robot motors, fans for industrial equipment, and for switching in power supply circuits. They are also frequently used in H bridge circuits to drive DC motors and stepping motors, and as high-side switches in switching power supply circuits, in combination with N-channel MOSFETs on the low side (see Fig. 1).

Fig. 1: Typical circuits and applications in which P-channel MOSFETs are used

P-channel MOSFETs are used in these markets and applications, but in recent years it is increasingly frequently the case that industrial equipment and consumer products use higher voltages, such as 24 V, as the input voltage of the power supply, and so demand is mounting for P-channel MOSFETs with higher rated drain-source voltages.

Still, there is the tradeoff in which the on-resistance rises when the required higher voltage rating is achieved.

In general, the switching frequencies of power supplies used in industrial equipment and consumer products are relatively low, and so conduction losses dominate among MOSFET-related losses, and MOSFET on-resistances have a direct impact. This is a matter that cannot simply be ignored. As one means of lowering the on-resistance while achieving higher rated voltage, element size can be increased, but this results in larger sizes for the MOSFETs, including their packages.

By using fifth-generation fine process technology, it was possible to reduce gate trench structures by 75% from conventional sizes, thereby successfully raising current densities. As a result, an industry-best A・Ron (on-resistance per unit area) was achieved. ROHM managed to cut the on-resistance by 62% from that of previous products for -40 V MOSFETs, and by 52% for -60 V MOSFETs (see Fig. 2).

Applications are expected to further expand, starting from industrial equipment, and so the lineup of packages has also been expanded. Packages have been prepared to accommodate a broad range of equipment, applications, and mounting conditions, from the TO-252, SOP8, TSMT8 (size 3028) and TSMT6 (size 2928) packages that have been used in the past for industrial equipment to packages that can dissipate heat from the bottom surfaces with superior heat dissipation such as the HSOP8 (size 5060), HSMT8 (size 3333), and HUML2020L8 (size 2020) (see Fig. 3; click on part numbers in the table to open a page with product details). 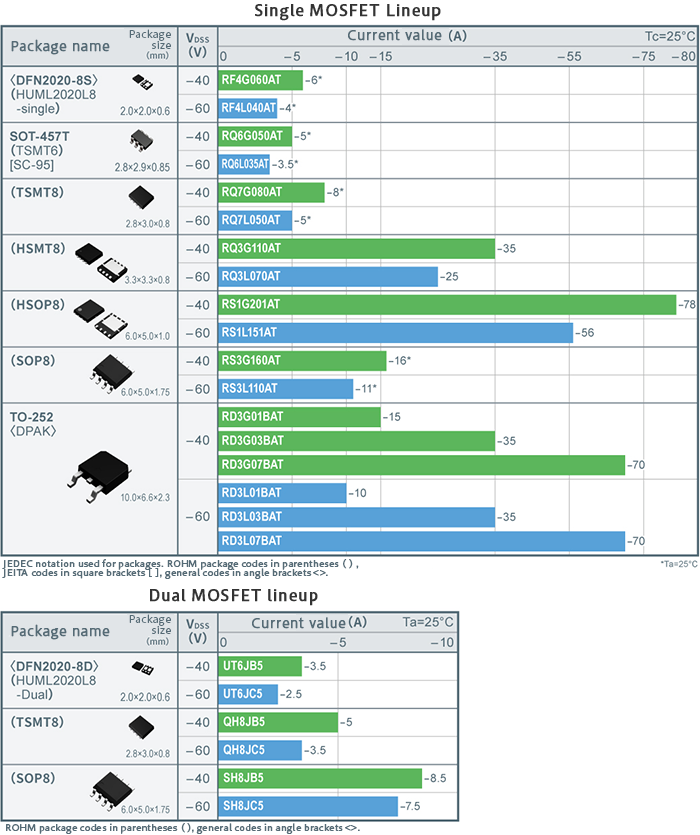 Packages equipped with these devices are slated to include, in addition to conventional packages, large-current packages using wireless structures as well as more compact packages.

This discussion will be continued; please watch this space.