In the previous session, we explained MOSFET parasitic capacitances. This time, we will discuss the switching characteristics of MOSFETs.

In power conversion, a MOSFET is essentially used as a switch. As MOSFET switching characteristics, the turn-on delay time Td(on）, rise time tr, turn-off delay time td(off）, and fall time tf are generally indicated. The following data is excerpted from the datasheet for the Nch 600V 4A MOSFET F6004KNX, which features a low turn-on resistance and fast switching. The names and symbols of these parameters may differ somewhat among manufacturers. For example, the turn-on/off delay time may be called the on/off delay time, and the rise/fall time may be the rising/falling time, and so on.

In addition, there are time-related parameters as well; these parameters may stipulate the time from one event to another.

Here, the expressions "rise/fall" of VDS may seem reversed when thinking of a waveform, but the output is inverted, and so these expressions are used. For example, the turn-on time may be interpreted as "the time from when VGS has risen to 10%, until the MOSFET is 10% turned on". 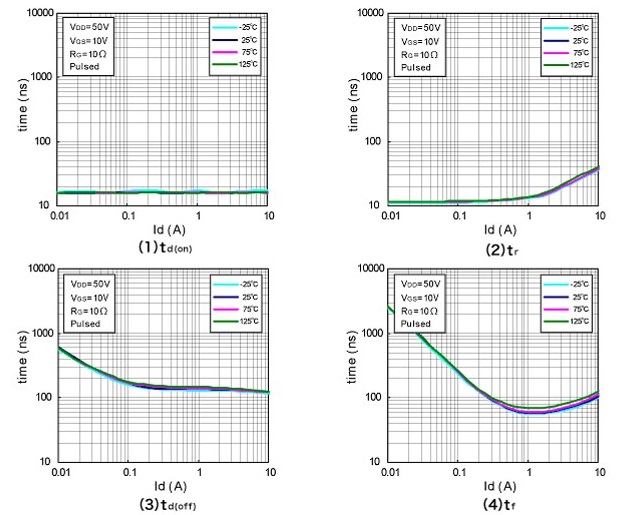 Next, an explanation of ID-VGS characteristics is scheduled.

・Switching characteristics are affected hardly at all by changes in temperature.