This article summarizes the entirety of the present topic.

In "Evaluating MOSFET Recovery Characteristics Using Double Pulse Tests", it was noted that inverter circuits, totem pole type power factor correction (PFC) circuits, and the like are bridge circuits in which two MOSFETs are series-connected, and consequently a phenomenon occurs in which a current that passes through the upper and lower arms causes the turn-on loss to increase.

In addition to these findings, it was also shown that there are cases in which even with a fast recovery characteristic, turn-on losses cannot be reduced, and that it is important to suppress a "self turn-on" phenomenon that is a cause of this. Self turn-on is a phenomenon that occurs due to the gate capacitances (CGD, CGS) and the RG of a MOSFET: when a switching-side MOSFET in a bridge configuration turns on, the free-wheeling MOSFET, which ordinarily should be turned off, turns on unintentionally, so that a through-current flows and losses increase.

The diagram below was also shown in “Mechanism of Self Turn-on Occurrence”, and indicates that when self turn-on occurs, in addition to the recovery current of the body diode, a large through-current also flows. 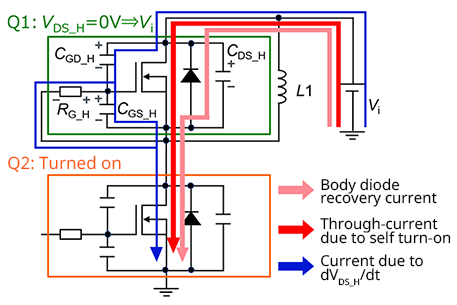 Hence switching losses in a bridge circuit are affected not only by the recovery characteristics (Irr, Qrr) of the MOSFET body diode, but also by the effect of a through-current caused by self turn-on. By choosing a MOSFET in which both of these are suppressed, switching losses can be greatly reduced.

Below are links to the articles and the key points of each.