Basic Configuration of a PSFB Circuit

As our second installment relating to evaluation of Si power devices, we here begin a series of articles relating to "Improving the Power Conversion Efficiency of Phase Shift Full Bridge Circuits".

In recent years, ever-greater power output has been demanded from power supplies for servers, onboard chargers, and other equipment. In many such high-level power supplies, full bridge circuits are used; in particular, phase shift full bridge (hereafter "PSFB") circuits are capable of zero-voltage switching ("ZVS") at turn-on of switching elements such as super-junction MOSFETs (SJ MOSFETs) and IGBTs for reduced switching losses, and hence can handle even higher power levels.

As the power capacities of power supplies have risen, improvement of efficiency has become an urgent issue. In general, even when efficiency is the same, losses themselves are larger in a power supply handling large amounts of power, and so the highest possible efficiency is sought.

Basic Configuration of a PSFB Circuit 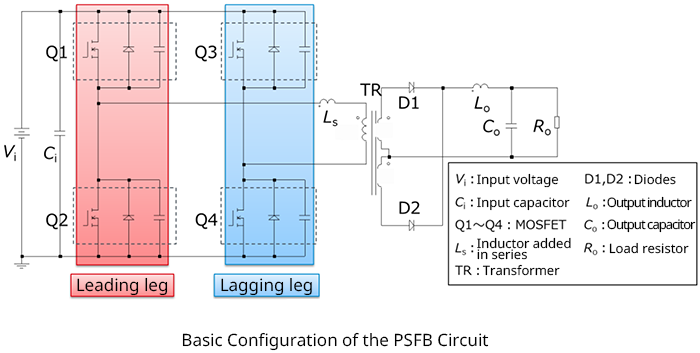 The leakage inductance of the transformer may be utilized as a resonance inductor in order to realize ZVS, which is one feature of the PSFB configuration; however, in some cases an inductor is added in series with the transformer to broaden the range of ZVS operation. Here, a circuit is assumed in which an added series inductor LS is used.

Next, the on/off timing chart for the switches is shown. The figures appearing in the bottom below the bidirectional arrows are labels representing the circuit operation modes. These correspond to the mode numbers used in the following explanation of circuit operation. 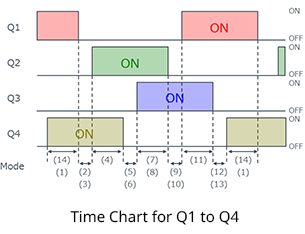 ・A PSFB switching circuit essentially consists of four switching elements (MOSFETs); the leakage inductance of a transformer is used as a resonance inductance necessary for ZVS operation.

・In order to extend the range of ZVS operation, there are cases in which an inductor is added in series. Here, a circuit with an added series inductor is assumed.