Guidelines Relating to Operation of Switching Elements Under Heavy Loading

When, under heavy loading, the recovery time trr of the body diode of a MOSFET is long and current remains, there is the possibility that a parasitic bipolar transistor may erroneously turn on while the MOSFET in a leading leg is turned off, causing failure of the MOSFET. This occurs because the parasitic bipolar transistor spontaneously turns on (erroneous turn-on) due to a charging current flowing to the drain-source capacitance CDS that occurs at turn-off, so that a large current flows momentarily.

In inverters and other circuits, in a state in which a forward current is flowing through the body diode of a MOSFET, by applying a high-voltage reverse bias, the charge in the body diode (Qrr) can be forcibly discharged rapidly. The time required for this discharge is trr, and so as a result, trr is shortened.

On the other hand, in a PSFB circuit, because the bias applied to a body diode during recovery is substantially 0 V, discharging of charge is slow, and consequently trr is longer. The diagram below shows in summary the VDS, ID, and recovery current of a leading-leg MOSFET.

When trr becomes longer, the current occurring due to recovery shifts as indicated by the red dashed line in the diagram. That is, charge remains in the MOSFET when turned off, current flows more readily, and erroneous turn-on of the parasitic bipolar transistor tends to occur. 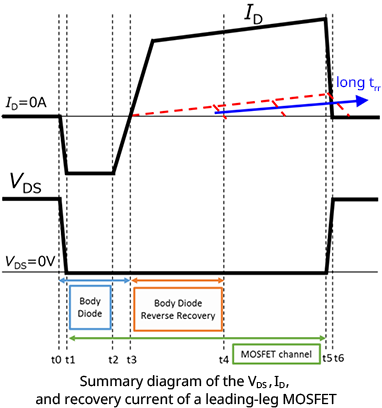 For reasons such as this, MOSFETs with a short trr must be used in a PSFB circuit. Quite simply, the smaller the value of trr, the more effective. SJ MOSFETs are devices on the market with a short trr and which feature fast recovery, but parameters relating to trr differ depending on the manufacturer and the series, and so thorough study is required to select an appropriate device.

Even in lagging-leg MOSFETs, there is the possibility of erroneous turn-on of the parasitic bipolar transistor occurring at turn-off. However, as explained when discussing PSFB circuit operation, because the interval during which ID is positive is long compared with leading legs, the effect of trr is not so great, and MOSFET failure due to erroneous turn-on of the parasitic bipolar transistor occurs less readily in lagging legs. A summary diagram of the recovery current similar to that for a leading leg is shown below. 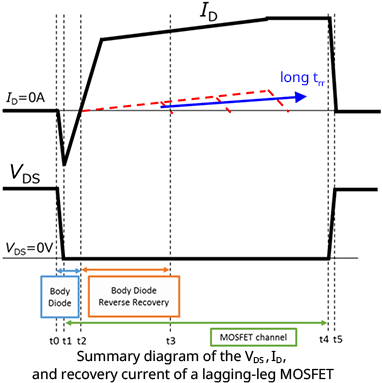 ・Under heavy loading, when trr is long, there is the possibility of erroneous turn-on of a parasitic bipolar transistor upon turn-off of a leading leg, resulting in MOSFET failure.

・In a PSFB circuit, the bias on a body diode during recovery is substantially 0 V, so that discharging of charge is slow, and consequently trr is longer.

・In a PSFB circuit, it is important that MOSFETs with small trr values be used.

・Even fast-recovery type SJ MOSFETs have different performance parameters depending on the manufacturer and the series, so careful examination is necessary when selecting a device.