・The operation states and current paths, represented as 14 different modes, should be understood.

・Differences in current waveforms occur due to differences in operation. MOSFET losses are different in the leading leg and the lagging leg, and different heat generation results, so that caution must be exercised in thermal design.

ZVS operation in a PSFB circuit is achieved by turning on a MOSFET switch when the output capacitor COSS of the MOSFET is fully discharged and a forward current is flowing through its body diode.

Below are waveforms of the Q1 to Q4 drain currents and the current flowing in the primary-side transformer in a PSFB circuit. 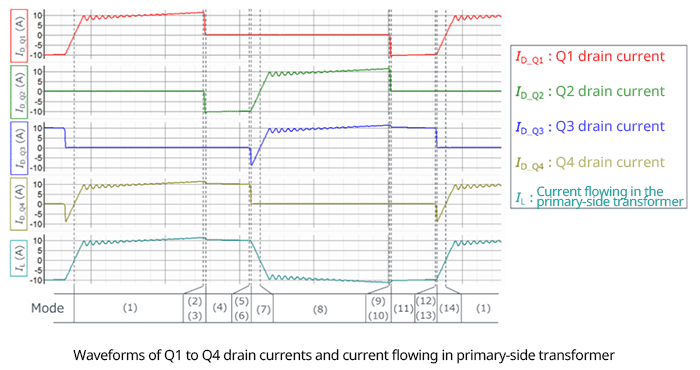 Taking the positive current direction to be the direction from drain to source, we see that for each of Q1 to Q4, there is an interval in which a drain current is flowing in the negative direction, that is, an interval in which a forward current is flowing through the body diode of the MOSFET. For example, in the case of Q3, this is the section of Mode (7). During this interval the drain voltage is nearly zero, and so by turning on the MOSFET during this interval, ZVS operation is achieved.

We also see that it is not the case that the same current waveforms, only shifted in phase, occur in the leading leg and the lagging leg. The reasons for the different waveforms can be understood upon considering the current paths for each of the Modes (1) to (14), indicated below the current waveforms. The numbers and positions of the modes are the same as in the timing chart presented previously.

Below, operation and current paths for Modes (1) to (14) are described.

Due to these changes in current paths, and as explained for Modes (7) and (14) in particular, the turn-on of a MOSFET in the lagging leg causes the input power supply and LS to be series-connected, and the energy in LS decreases rapidly. Because this action does not occur in the leading leg, differences occur in the current waveforms for the leading leg and the lagging leg as a result. Because of these differences in current waveforms, losses are different in the leading-leg MOSFETs and in the lagging-leg MOSFETs, and the amounts of heat generated are different, so care must be exercised in the thermal design.

As in the explanations of Modes (5) and (6) and Modes (12) and (13), in the lagging leg, if the amount of energy stored in LS is not greater than that stored in COSS for a MOSFET, the MOSFET charging and discharging are not completed, and so ZVS operation is not achieved. Hence, if Mode (5) is taken as an example, the condition to achieve ZVS is expressed as equation (1) below. IL1 is IL at the time that Mode (4) ends, and EOSS_Q3 and EOSS_Q4 respectively represent the energy required to complete charging and discharging of the Q3 and Q4 output capacitors.

List of articles related to the「Basic Operation of PSFB Circuits」