・Correctly understand the definition and purpose of absolute maximum ratings, and learn to judge whether a component can be used.

In this chapter, we explain the method and procedure for judging whether or not a selected transistor is appropriate for actual operation.

This time, we will explain ② ”Confirmation that absolute maximum ratings are satisfied” in the flowchart on the right. 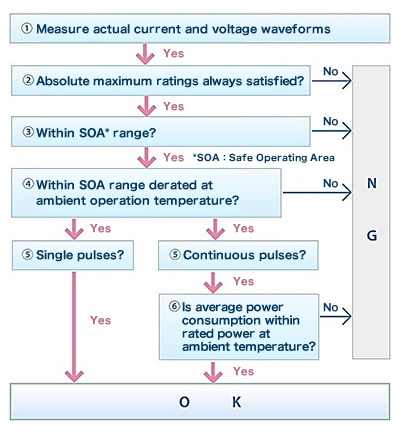 Taking an input voltage as an example, the absolute maximum rated value is a voltage that may be input, but apart from whether the device will operate normally, the resulting behaviour will have nothing to do with tolerances, actual performance, or the like. And, exceeding the absolute maximum rated value may possibly cause failure, but this does not mean that the device necessarily will fail for that input voltage. In essence, it is a value that should never under any conditions be exceeded.

This “confirmation that absolute maximum ratings are satisfied” is based on a proper understanding of these matters.

In the previous section, as an example we considered the overall switching operation of the MOSFET R6020ENZ and the waveform data of ID, VDS, VGS, and the power during on-off transitions. Basically, these data items confirmed that the absolute maximum ratings of the R6020ENZ were not exceeded. Below, absolute maximum ratings for the R6020ENZ and checkpoints are given. Try comparing them with the photos presented in the previous section. 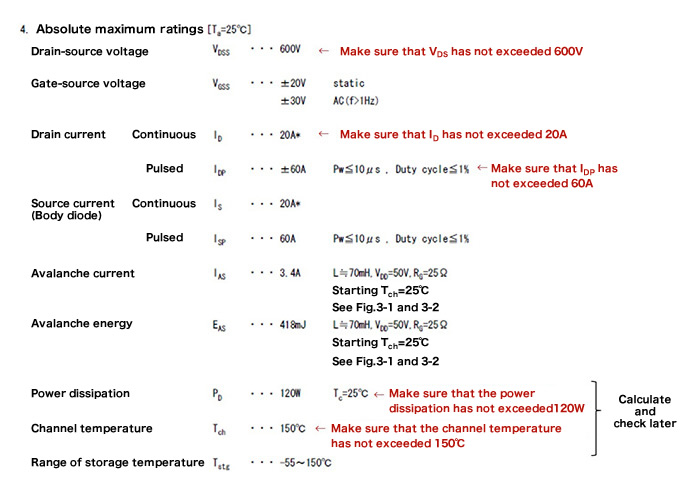 In actuality, by checking input and output voltages, load currents, temperatures, and the like in worst-case usage conditions, the requirement that absolute maximum ratings “must not be exceeded, even momentarily” is confirmed.

Next time, we will explain ③ Confirmation that operation is within the SOA (safe operating area).