Confirmation of Suitability in Actual Operation and Preparations

From here, we begin a new chapter on "Confirming Suitability in Actual Operation". Normally in circuit design, data sheet specs are referenced to select transistors able to satisfy the requirements of the circuit. However, upon actually prototyping the circuit, it is often the case that transient phenomena that could not have been predicted from the circuit diagram may occur, or scattering may be greater than had been expected, or margins prove to be inadequate. Of course the purpose of the prototype is to check for such problems, but in any case judgments are necessary as to whether the selected transistors are suitable or not in actual operation. In this chapter, we explain methods for checking whether a selected transistor is actually problem-free or not. 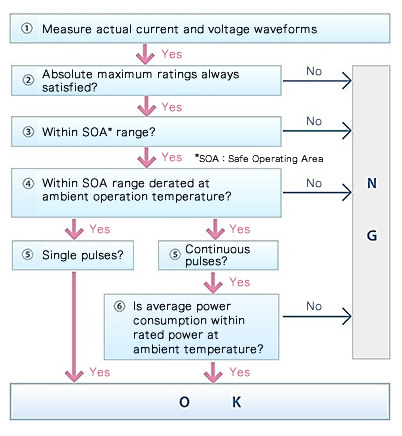 Confirmation of Suitability in Actual Operation

The flowchart shown on the right is an example of judgment to determine whether or not a selected transistor poses problems in actual operation. In the explanation, a switching circuit is assumed, and so in ⑤, "Continuous pulses" is selected.

Although not shown in the chart, as an addition final measure, ⑦, confirmation of the transistor chip temperature, is added.

①Measurement of the actual current and voltage waveforms

When confirming the various parameters described above, first it is necessary to check how the transistor handles voltages and currents in the circuit operation. Here, an example of a switching circuit is used. The transistor is the R6020ENZ, a low-noise super-junction MOSFET in the EN series (600 V, 20 A, 0.17 Ω, TO-3PF).

Specifically, waveform data is captured using an oscilloscope. The following waveform is the overall image of switching operation of the R6020EZN.

In addition to this, enlarged waveform data during on-off transitions is also captured in order to calculate power losses during switching, explained below. Here, we have also captured the waveforms for ID, VDS, VGS, and the power, shown in the waveform graphs. Waveforms during the on and off states, and during transitions between these states, are needed.

Next time, these waveforms will be used to check whether operations is within the maximum rated values.

・In prototyping, it is essential to determine whether a selected transistor can be used in actual operation.

・For purposes of confirmation, the voltages and currents handled by the transistor are measured.