・When a transient increase in power consumption is anticipated, the peak TJ in the transient state is sought.

・The peak TJ in the transient state should be checked to confirm that it does not exceed TJ MAX.

As the IC employed in the example, an LDO linear regulator is again used, the BD450M2EFJ-C. As the circuit conditions we consider a case in which the input voltage VIN undergoes transient fluctuation, as in Fig. 1. The steady-state input voltage is 13.5 V, but in this example the input voltage reaches 35 V for 3 seconds in a 60 second cycle.

As a result of transient fluctuation of the input voltage, the power consumption also fluctuates in a transient manner, and consequently it can easily be imagined that TJ will fluctuate as well. In such cases, the transient thermal resistance is used to calculate TJ by adding the transient temperature rise to the steady-state TJ.

Transient thermal resistance is often provided in graph form, and a value can be read off from the transient state time (pulse width). From the graph, the transient thermal resistance ZTH for the case of 3 seconds/cycle or a duty of 5% (green line) can be read off as 21°C/W. The steady-state value of 40°C/W is the value provided as θJA for the package. 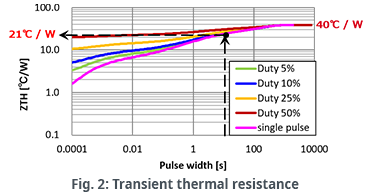 Finally, the ambient temperature TA in the transient state is added to determine TJ. Here TA is assumed to be 65°C.

In the transient state:

With this, we can find the maximum TJ under the condition that VIN of 13.5V transiently rises to 35V for 3s in a 60s period. Fig. 3 illustrates the temperature rise for the transient change in VIN. The temperature increase waveform is the VIN integrated waveform because the transient thermal resistance characteristic shown in Fig. 2 has a time-based parameter. 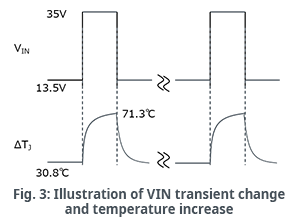 The purpose of the TJ calculations up to this point are to facilitate an understanding of the TJ peak when there is a transient increase in power consumption. Apart from this, there is also the approach of approximating TJ from the average power consumption. The following is a calculation example for the same conditions as those used above. As the thermal resistance, the steady-state thermal resistance θJA=40°C/W is employed.

In the above calculations, the temperature rise during transient behavior is 71.3°C, and so we see that in this case, calculation using an average power consumption is not appropriate.