Here we examine how best to estimate the optimum dead time in a bridge circuit.

This circuit performs synchronous rectification, and so simulations were used to study optimum values for the dead times of the SCT2450KE SiC MOSFETs on the high side (HS) and low side (LS), that is, the shortest times for which shoot-through currents do not occur. The respective dead times are set using the parameters TD1 (HS) and TD2 (LS) of the PWM controllers in the simulator. 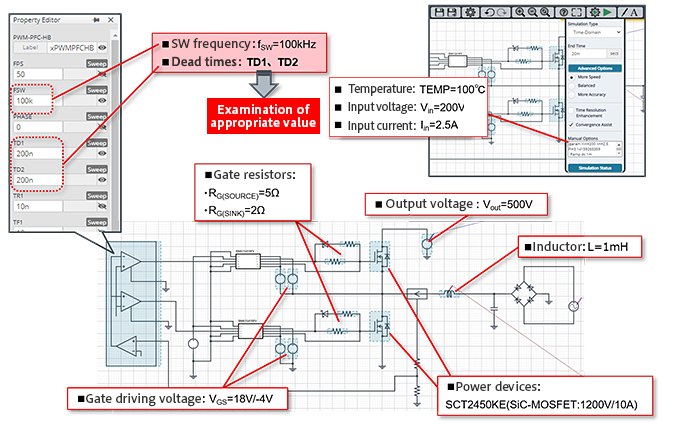 Fig. 17 shows the flow of current during a dead time period. In a circuit with a bridge configuration, dead times must be kept long enough to ensure that shoot-through currents are prevented, but if they are set unnecessarily long, losses increase. This is because during a dead time period a SiC MOSFET is in the off state, so that current flows through the body diode. Body diodes generally have large conduction losses, and if a body diode is conducting for a long time period, losses increase. 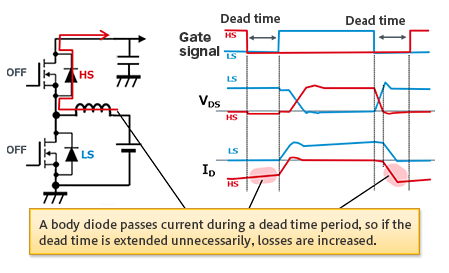 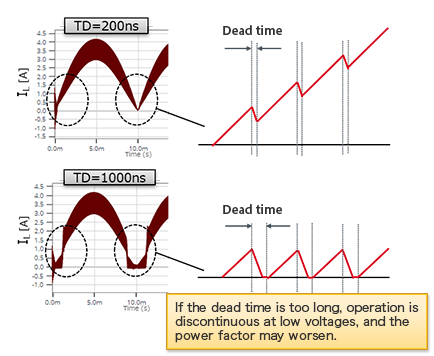 Fig. 19 shows loss simulation results for a SiC MOSFET when the dead time is changed. 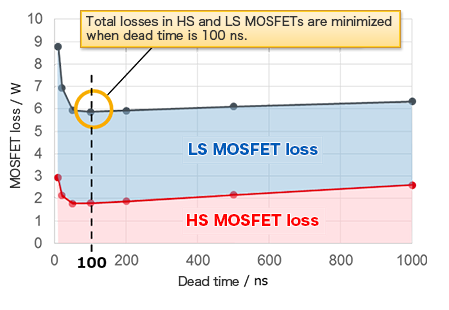 Fig. 19: Loss simulation results for a SiC MOSFET in which the dead time is changed

When the dead time is 50 ns or less, the flowing of a shoot-through current causes losses to increase sharply. Conversely, if the dead time is too long, the conduction time of the body diode in the HS SiC MOSFET is lengthened, and under these conditions as well, losses increase. SiC MOSFET losses are minimized when the dead time is the shortest possible time without the occurrence of a shoot-through current; in this example, we see that this optimum dead time is 100 ns. However, the switching speed varies depending on the temperature, variation in the manufacturing lot, and other factors, and so in general a margin of about 100 ns must be included. Hence in this case, 200 ns should be regarded as the optimum dead time.

・The dead time settings in a bridge circuit are related to losses and safety, and so must be studied thoroughly.

・The optimum value for the dead time is the shortest time at which a shoot-through current does not occur.

・The switching speed of a switching element varies depending on such factors as the temperature and variation in the manufacturing lot, and so a margin must be added to this shortest time in the design stage.