About the ROHM Solution Simulator

Here we explain the method of operation of Waveform Viewer, another tool for displaying simulation results in addition to the previously explained Wavebox tool. Those persons who have not read any introductory articles prior to this one should consult ”Starting a Simulation Circuit in the ROHM Solution Simulator” to start up the example simulation circuit. The following link can also be used to start the simulation directly.
https://www.rohm.com/solution-simulator/buck_converter_vo250v_io20a

For a quick introduction to methods of operation, please refer to the “Hands-On User’s Manual (PDF）”.

The previously explained Wavebox is a box that displays, in the circuit diagram display area, the waveform at the node indicated by a probe. Waveform Viewer, however, can display a waveform in a separate window, and it enables use of Waveform Analyzer, which is provided with various analytical and computational functions.

Fig. 2. State in which Waveform Viewer is open

In the state in which Waveform Viewer is open, upon clicking on the "Show Viewer in a new window" icon (Fig. 2, surrounded by the blue square) on the right side in Waveform Viewer, a separate new window opens (Fig. 3). When the separate window opens, Waveform Viewer, which had been in the circuit diagram display area, is hidden. The separate window can be enlarged, reduced, and so on, similarly to windows in general. Upon right-clicking on the "Pin Viewer to schematic" icon surrounded by the blue box in the window, Waveform Viewer returns to the circuit diagram display area.

Waveform Viewer has a simple screen organization. As illustrated in Fig. 3, the simulation results (red box ①) appear on the left side, and on the right side a Waveform Analyzer icon (red box ②) is displayed. Upon selecting a displayed wire or component name, the waveform of that wire or component can be displayed in the Simulation Results. Waveform Analyzer provides a variety of analysis and computation functions, described in detail below.

Let's actually use Waveform Viewer to display some waveforms.

As preparation, start up the simulation circuit for this example, open Waveform Viewer as explained above, and then open the separate window.

We begin by displaying the current i(p1) in the inductor u1. Find and click on "u1" in the "Simulation Results" shown on the left side to open u1, and place the mouse cursor on i(p1). On doing so, i(p1) is highlighted in green, as shown in the image on the left side of Fig. 4, and at the same time the relevant part in the circuit diagram is also displayed in green, confirming that it has been selected correctly. Drag and drop i(p1) onto the blank graph, or double-click on i(p1), to display the i(p1) waveform (right side of Fig. 4).

Fig. 5. Example in which three waveforms are displayed in Waveform Viewer 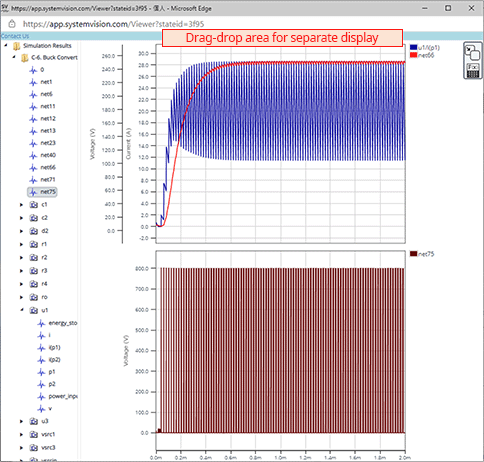 Operations for enlarging and reducing waveforms in Waveform Viewer are the same as in Wavebox. To enlarge a waveform, click and specify the range over which the waveform is to be enlarged (the red rectangle in Fig. 6). When any one waveform is enlarged, other waveforms are also similarly enlarged (Fig. 6). To restore an enlarged waveform to its original state, right-click on the graph; a menu is displayed, and select "View All" to return to display of the entire waveform.

To delete individual waveforms, right-click on the legend shown on the right side of the waveform diagram. Upon selecting "Delete Waveform" from the opened menu, that waveform alone disappears. Fig. 7 is an example in which only the net66 waveform (red) is deleted.

To batch-delete all waveforms at once, right-click on any waveform and select the "Clear Window" item in the menu that appears.

Fig. 8. Method for deleting all waveforms at once

The Waveform Analyzer in Waveform Viewer 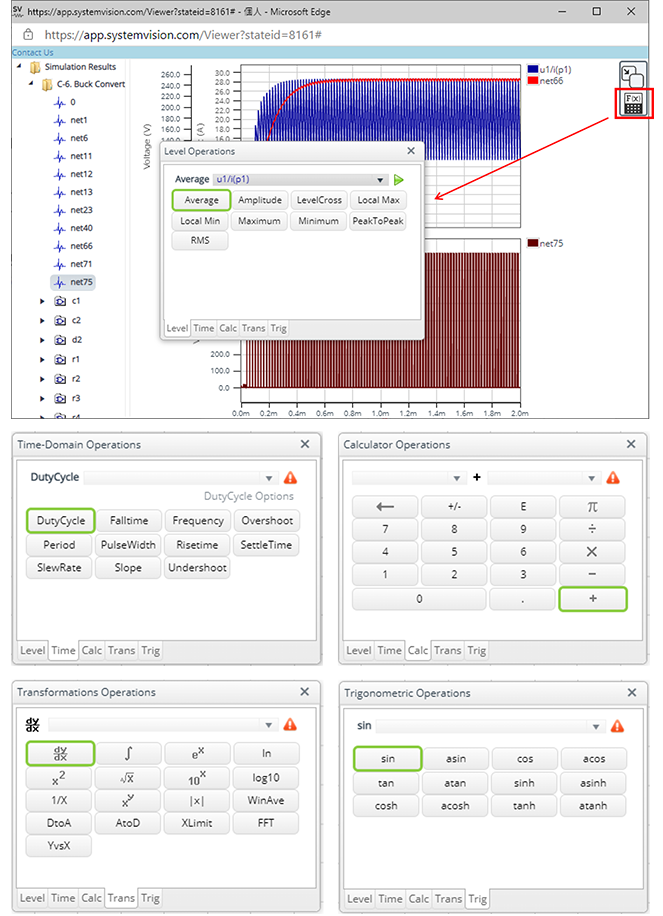 As an example of use of Waveform Analyzer, an example of frequency display is presented. Fig. 9 shows a state in which i(p1) in u1, net66, and net75 of the first example are displayed. Among these, we will cause the frequency to be displayed for the net75 switching waveform.

For ease of understanding, we will enlarge the net75 waveform and start up Waveform Analyzer. Either of these can be performed first. Then, click the Time tab (① in Fig. 10) in the Waveform Analyzer window to select "Time-Domain Operation", and select "Frequency" (② in Fig. 10) from the menu that is shown. On doing so, ③ in Fig. 10 changes to "Frequency", and ④ in Fig. 10 enables selection of a currently displayed waveform name; select net75 from the list. Then click the green symbol (▶) to execute the analysis operation; the frequency is displayed in the net75 waveform diagram (Fig. 11). 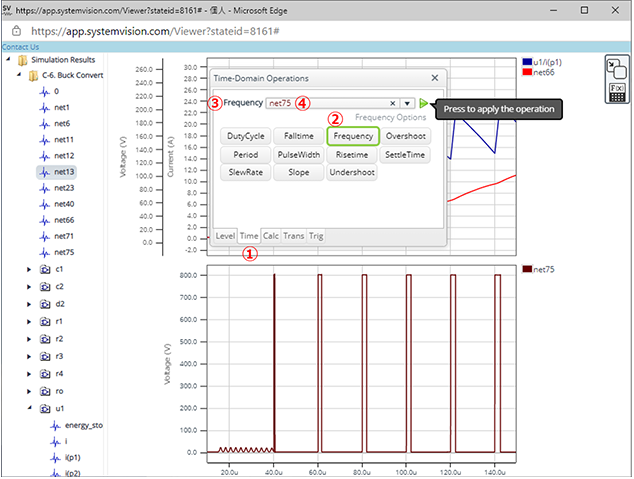 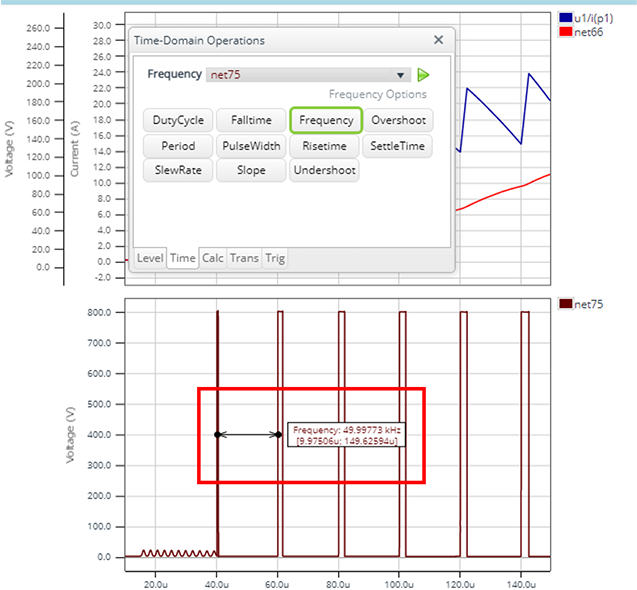 ・The Waveform Viewer of the ROHM Solution Simulator can display waveforms in a separate window in addition to displays in the circuit diagram display area.

・In Waveform Viewer, Waveform Analyzer provided with various functions for analyses and computation can be utilized.

・In the Waveform Viewer, simulation results can be displayed by dragging and dropping to the waveform display area or by double-clicking.

・Waveforms can be displayed either separately or superposed.

・Enlargement and reduction of displayed waveforms are the same as in Wavebox.

・Waveform Analyzer is provided with various analysis and computation functions.

・In Waveform Analyzer, different analyses can be performed simply by selecting a target and a function.