About the ROHM Solution Simulator

Here the method of operation of the Wavebox, which is one of the tools used to display simulation results of the ROHM Solution Simulator, is explained. Those persons who have not read any introductory articles prior to this one should consult ”Starting a Simulation Circuit in the ROHM Solution Simulator” to start up the example simulation circuit. The following link can also be used to start the simulation directly.
https://www.rohm.com/solution-simulator/buck_converter_vo250v_io20a

For a quick introduction to methods of operation, please refer to the “Hands-On User’s Manual（PDF）”.

A specific example is used to explain Wavebox operation. Please begin by starting the example simulation circuit. Upon startup, a number of Waveboxes are opened, but here we will be explaining procedures from the beginning, so click on the "×" in the upper-right corner of each box to close them.

●Example: Use Wavebox to display the current i(p1) flowing in the inductor u1

We will display the current flowing through the inductor u1 in the output direction (Fig. 1). Each operation will be explained in the process.

Fig. 1. Current i(p1) flowing through the inductor u1 in the output direction 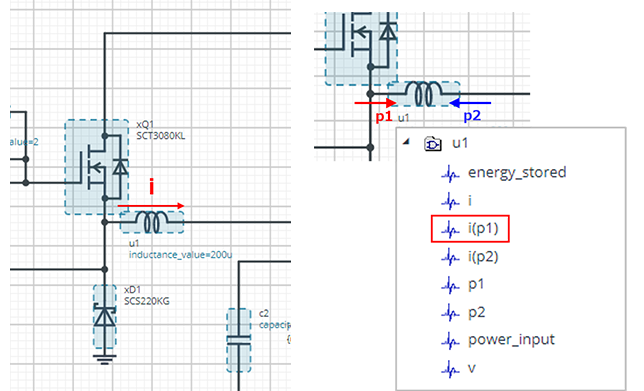 In order to display a Wavebox, the probe icon on the circuit diagram toolbar is dragged and dropped onto a wire or a component. Upon doing so, a Wavebox opens, and the waveform is displayed. To delete the Wavebox, click on the "×" in the upper-right corner of the window. Window movement and resizing are basically done the same way windows are handled on computers: drag the title bar for movement, and drag the frame of the window to increase or decrease the window size.

Fig. 2 shows a case in which the probe has been dragged and dropped in order to observe the current flowing in the inductor u1 of the example. When the probe is dropped on a component, a menu of the internal signals that can be observed opens. Upon selecting i(p1) in accordance with the example (Fig. 1), the current waveform is displayed, as in Fig. 3. 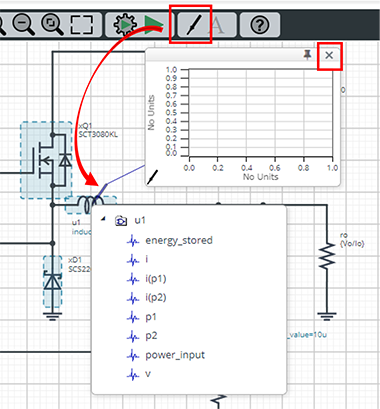 In this example, the probe is dropped onto the inductor u1, and the current i(p1) in the direction appropriate for observation is selected from the menu that opens (See Fig.2 and Fig.1). Upon selecting i(p1), the waveform of the current that flows in the inductor is immediately displayed in the Wavebox (Fig. 3).

Fig. 3. Current displayed when the probe is dropped on the inductor u1 and the current i(p1) is selected 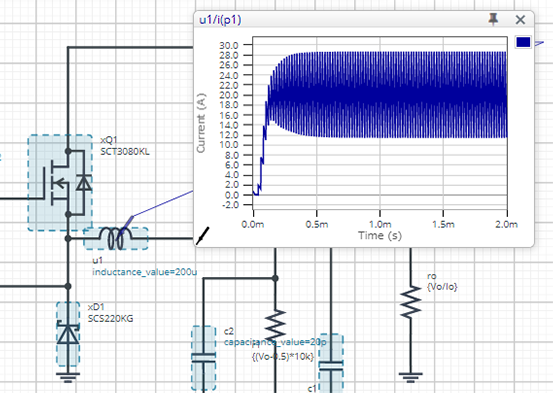 Enlarging and Reducing the Displayed Waveform in a Wavebox

To enlarge a waveform, specify the waveform range to be enlarged while left-clicking. To return from the enlarged range, right-click to open a menu, and select "View All" to return to the overall waveform (Fig. 4).

Fig. 4. Enlarging and reducing the displayed waveform in a Wavebox 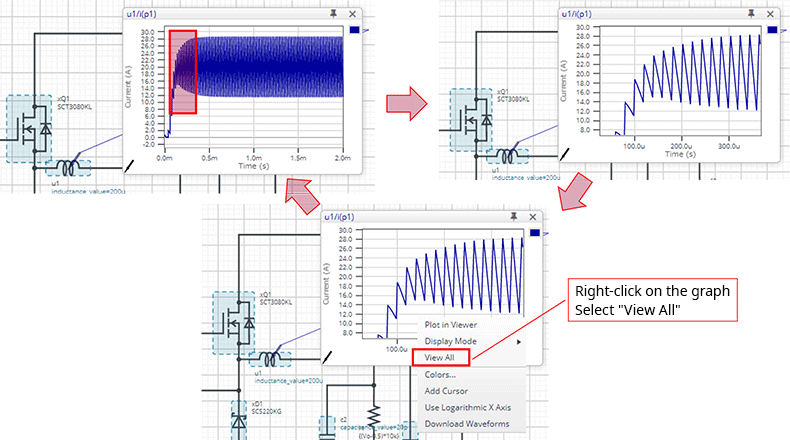 Using a Wavebox as a Differential Probe

A probe is shown in the lower left of a Wavebox window. By dragging and dropping this probe, the waveform of the site onto which the probe was dropped can be added to the Wavebox. Moreover, math operations can be performed on the observation results selected using two probe operations, and the results displayed. An example is explained below.

To begin with, drag the probe from the circuit diagram toolbar and drop it on the xQ1 gate wire. A Wavebox immediately opens and displays the voltage waveform for the gate terminal (Fig. 5, left). The "net13" in the title bar of the Wavebox is a name assigned to the xQ1 gate wire. When the cursor is moved over different wires, the names for the respective wires are displayed; try it yourself.

Next, upon dragging the probe in the lower left corner of the Wavebox and dropping it on the xQ1 source, the voltage waveform of the source terminal is added and displayed in the same Wavebox. At the same time, "net75", the name of the source wire, is added to the title bar (Fig. 5, right).

Fig. 5. Applying the probe to the gate and source of a MOSFET to display two observed waveforms in one Wavebox

Here there are things to be noted. What is being observed in this state is the voltages (referred to GND) at the gate and source pins, and not the gate-source voltage VGS. In order to observe the VGS waveform, the difference between the voltages at the two terminals must be found. The probe feature includes a function for performing math operations on the values observed using two probes. This will be used to display the VGS waveform.

In the Wavebox that is displaying the voltage waveforms at net13 (gate terminal) and net75 (source terminal), right-click to open a menu, move the cursor to "Math Operation", and from the menu that is then opened, select "net13-net75" (Fig. 6, left). Upon doing so, the result of subtracting net75 from net13, that is, the VGS waveform is displayed (Fig. 6, right; the time axis is expanded). In this case, the two probes function as a differential probe.

Display Format for Multiple Waveforms in a Wavebox

Upon right-clicking on a Wavebox, a menu opens. From the "Display Mode" item on the menu, "Multi Trace" or "Overlaid" can be selected. In "Multi Trace" mode, multiple waveform graphs are displayed alongside each other (Fig. 7, left); in "Overlaid" mode, waveforms are displayed superimposed (Fig. 7, right). Thus the display format can conveniently be selected according to the purpose when comparing waveforms.

Cursor Operations in a Wavebox

A cursor can be added to a Wavebox, and the cursor position can be read off as the values on the X-axis and Y-axis. Upon right-clicking on a Wavebox, a menu opens, and when "Add Cursor" is selected, a cursor is displayed (Fig. 8, left). Multiple cursors can be added.

Fig. 8. Addition of cursors to a Wavebox 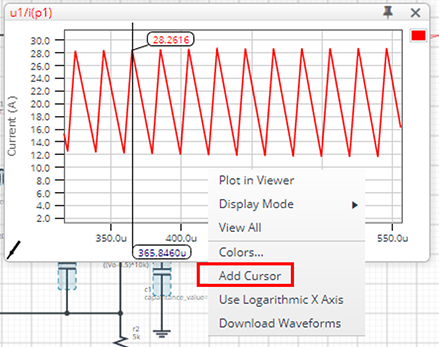 A cursor can be moved either by dragging it, or by right-clicking on the cursor and selecting "Set X Value" to directly enter a numerical value (Fig. 9).

To delete a cursor, right-click on the cursor; together with "Set X Value", "Delete" is also displayed (Fig. 9, left). Select "Delete" to delete the cursor.

The waveform data of a Wavebox can be downloaded as a CSV format file. The data can be analyzed in detail using spreadsheet software or the like. Right-click on the Wavebox and a menu opens; upon clicking "Download Waveforms", downloading of the CSV file begins (Fig. 10).

Fig. 10. Downloading of the waveform data of a Wavebox 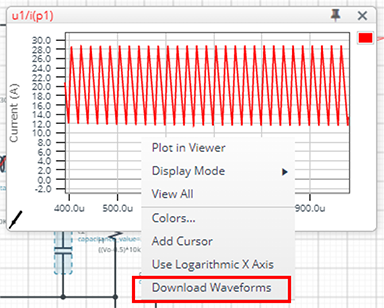 ・Wavebox is a tool for displaying simulation results.

・A wide variety of operations, such as waveform display, waveform enlargement and reduction, display of multiple waveforms, and display of the result of various math operations, can be performed by simple actions.

・Wavebox waveform data can be output to a CSV file and downloaded.