In recent years in the fields of electronic circuit design and evaluation, software-based simulations have come into widespread use. There are various reasons for this. For example, in addition to faster operation and faster signals, electronic component miniaturization, surface mounting, and other developments have resulted in an increasing number of cases in which evaluations using traditional breadboards are no longer realistic. However, the most important advantages have probably been the ability to quickly and simply confirm circuit operation and characteristics, so that actual evaluations could be conducted under conditions that are nearly optimal, and the ability to greatly reduce the time and number of processes involved in development, including the number of prototype cycles. In order to support this new trend, electronic component manufacturers now provide component data for use in such simulations, and there are now numerous simulation software packages, called simulators, available for use.

Here, we consider simulations based on SPICE, which is in relatively wide use and is available in a free version, and explain the basics of circuit simulations, including the software installation.

SPICE is one such electronic/electric circuit simulator, initially developed at the University of California at Berkeley in 1973. SPICE is an acronym for Simulation Program with Integrated Circuit Emphasis. At the time, its major objective was simulation of the operation of analog circuits that used ICs such as op-amps as well as discrete components such as transistors, diodes, resistors, and capacitors.

SPICE was developed up through SPICE3 (1985), and thereafter improvements and functions were added to the SPICE foundation for commercial use. PSPICE, which is well known even today, was the first version of SPICE for commercial use, solid by MicroSim.* It enabled SPICE, which had previously run on mainframes, to be used on personal computers.
*MicroSim merged with OrCAD, and subsequently OrCAD was purchased by Cadence. PSPICE is a part of Cadence's design support tool OrCAD.

The following are the major commercial simulation software packages. In essence, they are all similar in having simulation of circuit operation as their objective, but the GUIs (graphical user interfaces) differ somewhat. Where performance and specifications are concerned, there are further differences in the convergence algorithms, models available for use, upper limits to the number of elements used, and the like, and a given software package may also be available as a free version with some limits imposed.

The above company and product names and the like are generally trademarks or registered trademarks of their respective companies.

The framework of operation of such simulators is briefly explained.

In general, the diagram of a circuit to be simulated is first input. Such components (models) as transistors, ICs, capacitors, diodes, resistors, and inductors are provided; the components are selected and connected. This can be performed in the same manner as when drawing an ordinary circuit diagram.

When the circuit is completed, simply by clicking on a simulation execution button, the corresponding simulation is performed. In the example of the figure, a circuit diagram is created to "ground the gate of a P-channel MOSFET, apply a voltage of 0 to 10 V in 0.1 V steps to the drain, and monitor the current flowing in the MOSFET at that time"; as a result of the simulation execution, a graph of current values is obtained (the action of the blue arrow on the left). 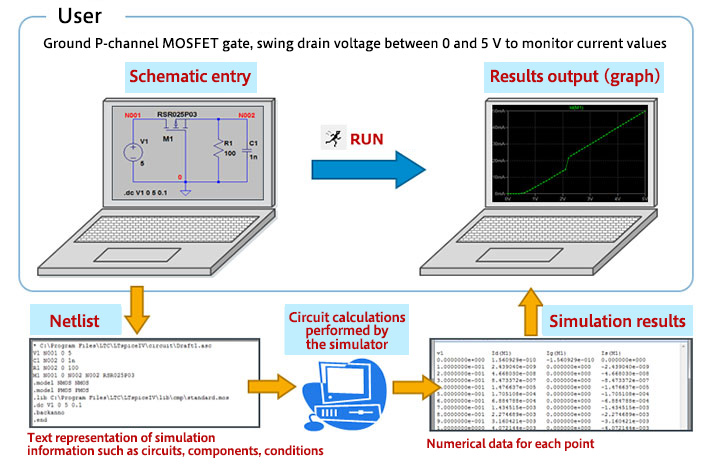 This is the apparent procedure, but in actuality, the circuit diagram that has been created is converted into a kind of source code, called a netlist, that describes all the information--the components, circuits, simulation conditions, and so on. The simulator uses the netlist to perform circuit calculations, that is, to run the simulation, and outputs data. In this case, current values are stored as numerical values for each 0.1 V increment. Based on this data, a graphing function is used to output a graph (flow of the yellow arrows).

The following is an example of a netlist for a simulator different from the one of the example above, but describing the same circuit information. A detailed explanation will be presented later, but for now, the reader can look at the netlist to get an idea of what it describes. 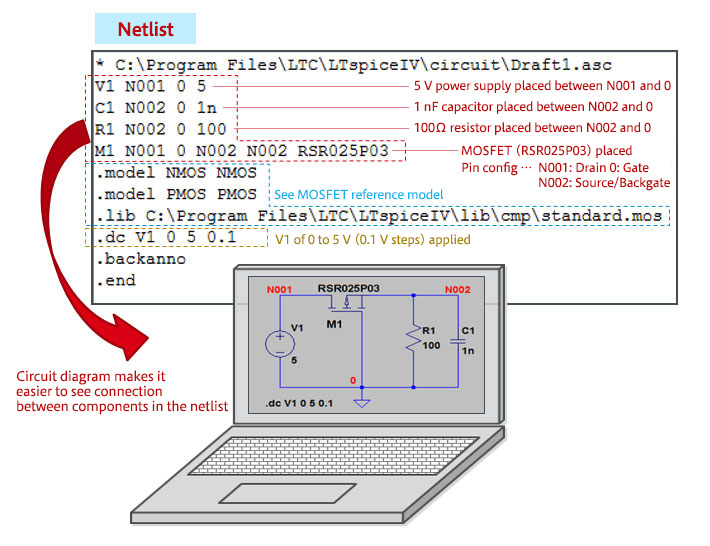 In the next article, we explain downloading of simulation software in order to try running it.

・Software-based simulations are widely used in the design and evaluation of electronic circuits.

・Through software simulations, simple and quick evaluations become possible, and the time and processes involved in development can be reduced.

・Various simulator packages based on SPICE can be obtained.