This begins a new chapter on "DC/DC Converter PCB Layout" in the Design edition on DC/DC converters.

When designing DC/DC converters, of course the circuit configuration and selection of components are important, but the PCB layout is comparable in importance. Even if the circuit diagram and component values are reasonable, if the PCB layout is not appropriate, not only will performance suffer, but correct operation may not even be possible. It may sound a bit exaggerated, but in fact many problems with prototype devices not working properly originate in the PCB layout.

Moreover, a state in which "there's a lot of noise, but anyways it's working, for now" may be adequate as a "for now" power supply, but the noise that is occurring will lower the system S/N ratio, and it is far from rare for such problems to develop to the point where system specifications are not satisfied.

Problems originating in the PCB layout include noise in the output (including spikes and oscillation), worsened regulation, and unstable operation. In many cases, these problems can be resolved through appropriate layout. In this chapter we will explain appropriate layout with respect to the following areas. 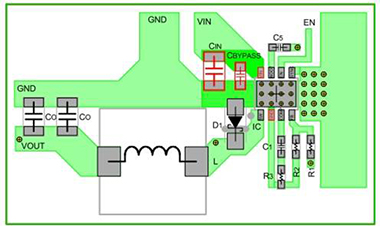 First, important points regarding PCB layout are explained. You should read the rest of this chapter while keeping these points in mind.

In the next section, we explain the current paths of a switching power supply circuit, as a foundation for thinking about PCB layout.

・When designing switching power supplies, PCB layout design is as important as the circuit design.

・If an inappropriate layout is used, problems such as noise, worsened regulation, and instability may arise.