This time, we discuss the layout of ground wiring. Many components require their own ground wiring, and so the ground wiring layout must be considered carefully. And, in a DC/DC converter circuit, as we have explained a number of times previously, it is important to separate the signal system, like feedback of the output voltage to the control circuit, and the switching (power) system, which switches large currents. Here too, ground wiring requires special consideration.

Ground potential is the same potential everywhere; but in a circuit in which analog signals and digital signals coexist (which, of late, is the case for nearly all circuits), an analog ground and a digital ground are provided separately, and measures are adopted such that noise arising from digital signals is not conducted so as to interfere with minute analog signals. This is the same approach taken in switching power supply circuits (and not just DC/DC converters). For example, care must be taken to ensure that noise generated at switching nodes has as little effect as possible on feedback paths the line voltage of which directly affects the output precision.

There are a number of terms used, but here, we will refer to a ground used for lines that are susceptible to noise, such as feedback paths, as an analog small-signal ground (AGND), and will use "power ground" (PGND) for a ground that is used for lines that switch large currents, such as a switching nodes.

As the most important issue, AGND and PGND must be separated. They are at the same potential, and ultimately they are connected, but the reasoning is that the GND to which large currents return as a result of switching and the GND for control signals must be separated in order to prevent interference.

Next, PGND is essentially laid out as a single line on the top layer (as on the left in Figure 8). However, as a result of component arrangement and the like, there are cases in which a single continuous line is not possible. In such cases, PGND may be broken up and connected on the rear surface or by an internal layer, using vias (as on the right in Figure 8). Due to the influence of resistance and inductance of the vias, there may be increased losses and the noise level may be worsened, and so actual device should be used for thorough verification.

The ground plane is the GND wiring, which has a certain area. Providing a ground plane on the rear surface or in an inner layer should be understood to be, as a rule, only a secondary role for ground wiring, given the goals of alleviating DC losses, providing shielding, and dissipating heat.

When a ground plane is provided in an inner layer or on the rear surface of a multilayer board, consideration must be paid to inputs with substantial high-frequency switching noise and to connection of diodes to PGND. As in Figure 9, when there is a common ground in the third layer and a signal ground in the fourth layer, connections of these grounds to PGND should be made close to an output capacitor with little high-frequency switching noise. PGND connections must not be made near noisy inputs or diodes.

When there is a PGND plane for DC loss alleviation in the second layer, the top layer PGND and the second layer must be connected by numerous vias, to reduce the PGND impedance. 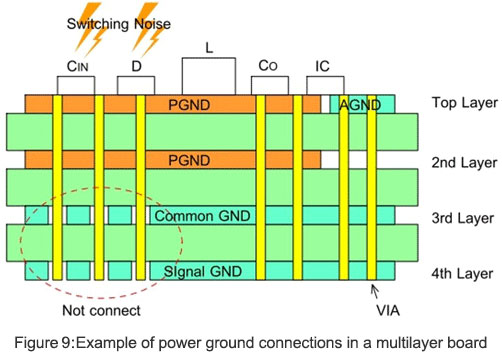 The reader is probably aware that many DC/DC converter ICs are provided with two GND pins, which are an AGND (SGND) pin and a PGND pin. This is because, for entirely the same reasons, the signal system and the switching (power) system are kept separate within the IC as well. And the two must similarly be at the same potential, and so ultimately they are connected. It is important that the AGND and the PGND of an IC be connected at a single point. To determine the optimum point for connection, the layout information of the data sheet and other resources should be consulted.

・AGND and PGND must be separated. As a rule, PGND is laid out in the top layer, without interruption.

・If PGND is interrupted and connected on the rear surface using vias, losses and noise are worsened due to the resistance and inductance of the vias.

・PGND should be connected to a common ground or a signal ground close to an output capacitor with little switching noise.