In the previous article, placement of output capacitors and freewheel diodes was explained. In this article, we explain the positioning of inductors, which are next placed on a board.

After output capacitor and freewheel diode placement, the inductor is positioned.

One guideline to use when determining wiring widths, after having considered the wiring resistance, heat dissipation, and antenna effects, is current rating. The following graphs indicate the temperature increase due to the current being passed and the conductor width. For example, when a 2 A current is passed through wiring with a conductor thickness of 35 μm, if the temperature increase is to be held to within 20°C, then the Δt=20°C curve (light blue) is referenced to determine the wiring width at 2 A. In this case, we find that a conductor width of 0.53 mm is sufficient. 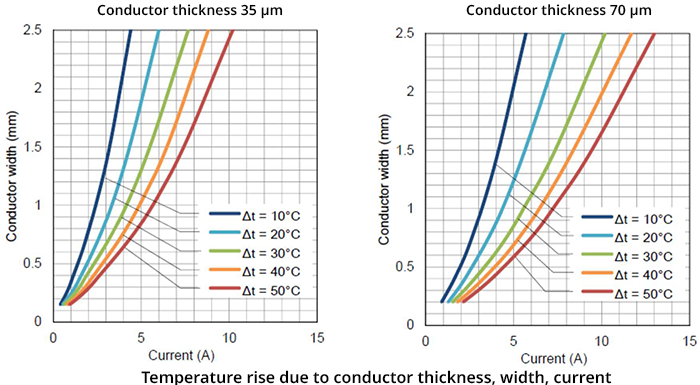 In actuality, because wiring is affected by heat generated by nearby components and the ambient temperature, it is recommended that the conductor width be selected with ample margin included. For example, for a one-ounce (35 μm) board, the conductor width is generally set to 1 mm or more per ampere of current, and for a two-ounce (70 μm) board, the width is generally made 0.7 mm or more per ampere. In this way, separate design rules that include margins are typically applied. 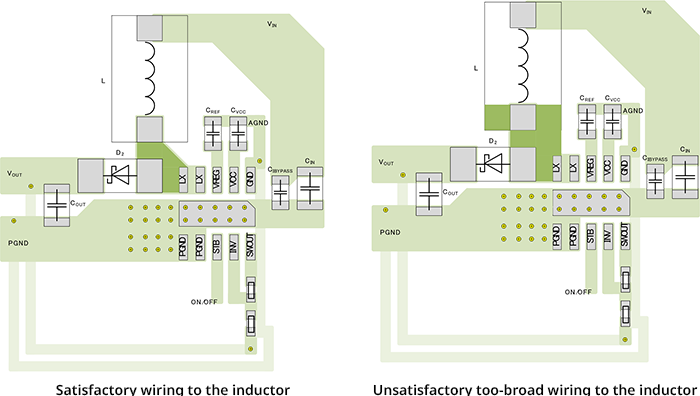 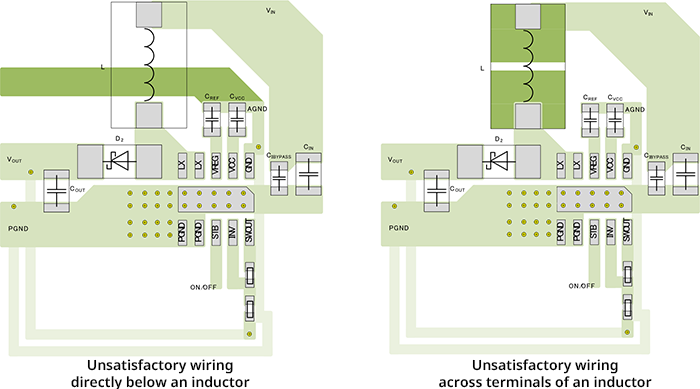 The second point to note is the distance between inductor terminals. As in the example on the right in the diagram above, because the copper foil area is broader in the terminal portions, the effective distance between the terminals is reduced, and the high-frequency signal of the switching node may be induced in the input via stray capacitance. As with the other wiring examples, the copper foil for the inductor terminals should be limited to the minimum amount necessary.

・The inductor should be placed close to the switching MOSFET Q2, and the area of the copper foil wiring should not be made larger than necessary.

・As a guideline for determining the wiring width, the current rating should be considered, and the width should be chosen with a margin included.

・If wiring directly below the inductor cannot be avoided, an inductor with a closed magnetic circuit structure and minimal leakage of magnetic lines of force should be used.

・The distance between inductor terminals should not be shortened.