This article addresses grounds. It is often said that grounds are important, that they must be robust, and the like; but in actuality the ground of a circuit is not given sufficient consideration, and a ground that deviates from basic rules will be a source of problems. The following guidelines should be regarded as mandatory. Moreover, they are not limited only to step-up DC/DC converters.

To begin with, an analog small-signal ground and a power ground must be separated. As a rule, a power ground is laid out without being divided on the top layer which has comparatively low wiring resistance and better heat dissipation.

If a power ground is divided and connected on the rear surface using vias, the effects of the via resistance and inductance lead to worsened losses and noise. A ground plane is provided in an inner layer or on the rear surface for the purposes of alleviating DC losses, as a shield, and for heat dissipation, and serves only as an auxiliary ground.

The following diagram shows the PCB layout for this example. It is an example of the basic layout of the power ground (PGND, the orange area) and the analog small-signal ground (AGND, the blue area) on the top-layer. 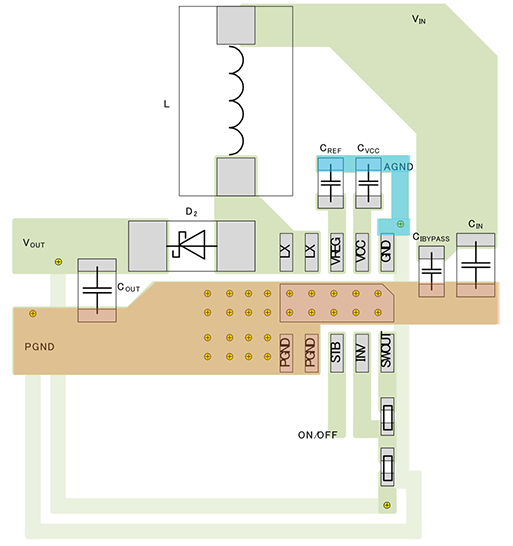 When positioning a ground plane in an inner layer or on the rear surface of a multilayer board, attention must be paid to power grounds, which have large amounts of high-frequency switching noise. When a power ground plane is present in the second layer to alleviate DC losses, the top layer and the second layer are connected by numerous vias to reduce the impedance of the power ground. In addition, when there is a common ground in the third layer and a signal ground in the fourth layer, connection of the power ground to the grounds in the third and fourth layers should be only at the power ground near the output capacitor, where there is minimal high-frequency switching noise. The power ground connection must not be made near noisy inputs or freewheel diodes. Please refer to the following cross-sectional image. 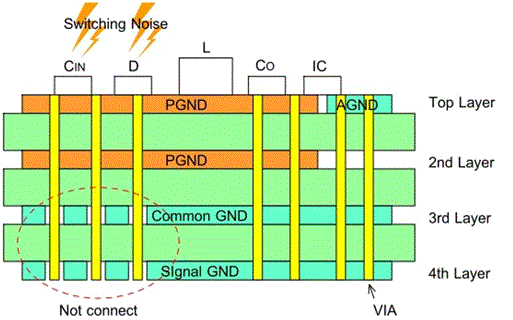 ・As a basic rule, PGND should be positioned in the top layer without being divided.

・If PGND is divided and connected on the rear surface through vias, losses and noise are worsened due to the via resistance and inductance.

・When ground planes are positioned in inner layers and on the rear surface of a multiplayer board, care must be exercised when connecting the PGND to the input or to diodes at which there is much high-frequency switching noise.

・The top-layer PGND and an inner-layer PGND plane should be connected through numerous vias to reduce the impedance, in order to alleviate DC losses.