What is load transient response?

Load transient response is the response characteristic to a sudden load fluctuation, that is, the time until the output voltage returns to a preset value after having fallen or risen, and the waveform of the output voltage. In contrast with load regulation, it is, just as the name implies a transient-state characteristic. Actual phenomena are explained using the following graphs.

In the waveforms of the graph on the left, the load current (the lower waveform) rises from zero rapidly, with a rise time (tr) of 1 µsec. On the other hand, the output voltage (upper waveform) momentarily drops, and thereafter rises rapidly, slightly exceeding the steady-state voltage, then drops again to a stable state. When the load current drops suddenly, we see that the opposite reaction occurs.

To explain things in a somewhat less formal way, when the load increases, suddenly more current is needed, and the output current is not supplied fast enough, so the voltage drops. In this operation, the maximum output current is supplied for a number of cycles in order to return the dropped voltage to its preset value, but a little too much is supplied and the voltage rises a bit higher, and so the supplied current is lowered so that the preset value is reached. This should be understood as a description of normal transient response. When there are other factors and abnormalities, other phenomena are included in addition to this.

In an ideal load transient response, there is response to a fluctuation in load current over few switching cycles (a short length of time), and the output voltage drop (rise) is kept to a minimum and returns to regulation in a minimal amount of time. That is, the occurrence of a transient voltage like the spikes in the graph occurs over an extremely short time.

The center graph is for a load current rise/fall time of 10 µsec, and the graph on the right is for 100 µsec. These are examples in which more gentle fluctuations in the load current result in improved response following, with little output voltage fluctuation. However, in actuality it is difficult to adjust the transient behavior of the load current in the circuit.

Important points to remember when evaluating the transient response of a power supply are summarized below. 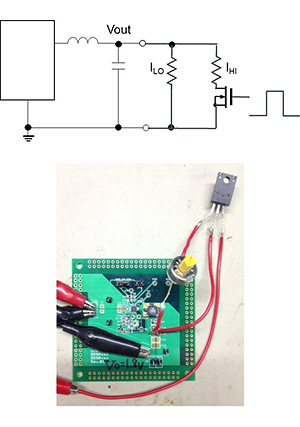 A specific evaluation method is explained. When experiments are performed, a circuit or device the load current of which can be switched instantaneously is connected to the output of the power supply circuit for evaluation, and an oscilloscope is used to observe the output voltage and output current. If the response of actual equipment is to be confirmed, for example a state is created in which a CPU or the like transitions from a standby state to full operation, and the output is similarly observed.

Important points in performing evaluations were described above; the phase margin and crossover frequency can always be inferred from an observed waveform, but this is fairly troublesome. Recently a measurement device called a frequency response analyzer (FRA) has come into quite widespread use, and can be used to measure phase margins and frequency characteristics of extremely simple power supply circuits. Using a FRA can be very effective.。

When, in actual practice, there is no appropriate load device capable of instantaneous large-current on-off switching that can be used in experiments, a simple circuit such as that on the right in which a MOSFET is switched can be used. Of course tr and tf must be determined. 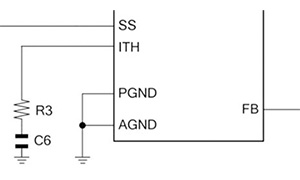 Some switching regulator ICs have a pin for adjustment of response characteristics; in many cases it is called ITH. In an application circuit indicated on the data sheet for the IC, more or less reasonable component values and configuration for a capacitor and resistor to be connected to the ITH pin under those conditions are presented. In essence, this is taken as a starting point, and adjustments are made so as to satisfy the requirements made of the circuit that is actually fabricated. It is probably best to begin by keeping the capacitor fixed and varying the resistance value.

Below are oscilloscope waveforms and a frequency characteristic analysis graphs obtained using a FRA, showing the manner of change of the load transient response characteristic of the BD9A300MUV used in these examples when the capacitance of the capacitor at the ITH pin is fixed and the resistance value is adjusted.

※Upon lowering the resistance value of R3 the band was narrowed, and the load response was worsened. There are no problems with operation itself, but there is too much of a phase margin.

※By raising the R3 resistance, the band is broadened and the load response is improved, but ringing occurs upon voltage fluctuation (enlarged waveform section).
The phase margin is small, and depending on scattering, abnormal oscillation may occur.

The above are examples of adjustment of the response characteristic using the ITH pin. In essence, voltage transients that occur in the output voltage cannot be completely eliminated, and so adjustments are made such that the response does not pose problems for operation of the circuit being supplied with current.

・Transient loading varies greatly depending on the circuit, and power supply response is also varied; hence adjustments must be made according to the conditions imposed.

・A method of adjusting the IC transient response characteristic is mainly used, but relaxation of load transients can also be employed.

・If loop stability is poor, oscillation or other abnormal phenomena may occur. Observation of the output voltage waveform is indispensable.