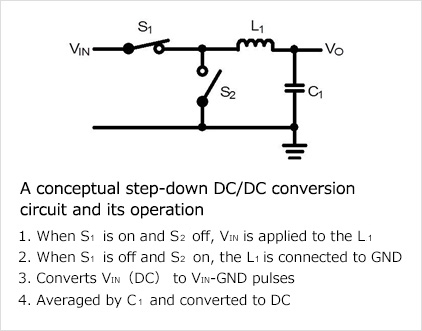 In actual PWM, because the load current for the average output fluctuates, over a continuously fixed on-time, the voltage fluctuates as a function of the load current. Since such an operation would not rate as a regulator, when the output falls, the on-time is increased, and more energy is transmitted from the input side to elevate the output voltage. When the output voltage has restored itself sufficiently, the on-time is reduced to stop any further rise in output.

The circuit shown below represents an actual circuit replacing the concept diagram. The switch S1 is replaced with a MOSFET, and S2 with a Schottky diode. The figure also shows the comparison and control circuits that were omitted in the original diagram. This is a typical step-down switching circuit which is referred to as a non- synchronous or diode-rectifying circuit.

Operation of a step-down switching regulator

The switching waveforms for the actual current and voltage are shown below. S1 denotes a MOSFET switching transistor; D1, a Schottky diode; L1, an inductor; C1, an output voltage; and VIN, an input voltage. 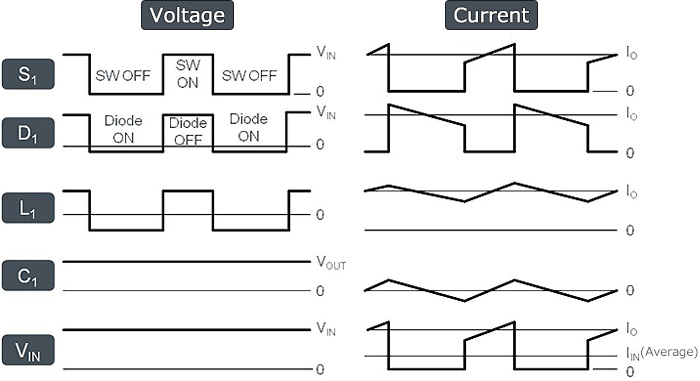 In this article, in the way of a review we explained the operation of a basic switching regulator. For actual evaluation, at each node the current and voltage waveform must be checked. Prerequisite to this exercise is a solid understanding of these basic operations.

・There are AC/DC and DC/DC switching regulators, each providing a variety of conversion methods.

・Selection of a method well-suited for a given design project requires a solid understanding of the pros and cons of each method.

・A key to understanding DC/DC conversion is that switching is employed to chop the energy necessary for the output in terms of time, and the results are rectified and smoothed for re-conversion to DC.

・Essential to evaluating the performance of a switching regulator is a good understanding of the current and voltage waveform in each node.