・CIBYPASS must always be placed on the same surface as the IC, and should be positioned as close to the IC input pin as possible.

・When CIBYPASS is positioned suitably, CIN may be placed about 2 cm from the IC, and may also be mounted on the opposite side.

・A single ceramic capacitor can be used in place of both CIN and CIBYPASS if both supply of large currents and rapid response to high-frequency switching currents can be secured.

From this point we shall explain placement of individual components and important points to consider. The procedure described in the previous article described how to determine the placement in order of components; if more or less the same order is used, the PCB design can be performed efficiently.

CIBYPASS must always be placed on the same surface as that on which the IC is mounted, and should be placed as close as possible to the IC input pin.

In particular, placement and wiring should be such that ground loops are as small as possible. As explained in “Current Paths in Step-up DC-DC Converters “, CIBYPASS is a source of sharp parts of current waveforms, and is particularly important insofar as high-frequency spike noise occurs.

The diagram shows a desirable input capacitor arrangement example. When CIBYPASS is positioned appropriately, the role of CIN is limited to supplying large currents, and so assuming this is the case, CIN may be placed about 2 cm from the IC without causing problems. It can also be placed on the rear surface of the PCB using vias. 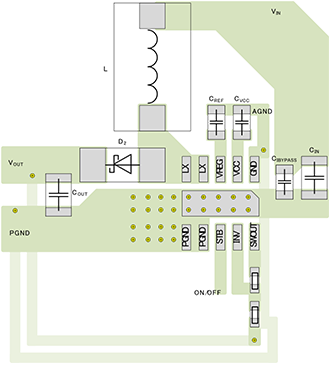 List of articles related to the「Placement of Input Capacitors」